Since I’ve pretty much exhausted every sports league imaginable from college level to professional and everything in between, I had to find a new source of bad team names. Fortunately I came across a completely untapped source… high schools.

Now you might be saying, “Picking on pro teams and colleges is one thing but don’t you think picking on kids is going a bit far?”… to you I say, absolutely not. If it weren’t for the fact that most pre-schools don’t have team names, I would be mocking those little brats too.

Hartford Hustlers (AR) – The magazine? Or the street thug? I did like their hustle though, which is why it was so hard to add them to this list.

Avon Old Farms Winged Beavers (CT) – Far be it from me to correct our neighbours to the south but as a Canadian I feel compelled to question the existence of a beaver with wings.

Centralia Orphans (IL) – Unless these kids are actually orphans this strikes me as a really odd choice for a team name.

Cobden Appleknockers (IL) – I can’t figure out if this means they have apple-shaped knockers or that they enjoy knocking apples. Not that either explanation really makes it any better.

Hoopeston Cornjerkers (IL) – Remind me never to visit Hoopeston. I’m not really in to corn in that way.

Teutopolis Wooden Shoes (IL) – “Who are we?” The Wooden Shoes! “And what are we going to do?” Perform traditional Dutch folk dances!

Hobart Brickies (IN) – Anyone else see the irony in an educational institute promoting made up words?

Lawrence High School Chesty Lions (KS) – While I’ve seen many a chesty cougar in my day, I can’t say I’ve ever seen a lion I would describe as chesty.

Mt Clemens Battling Bathers (MI) – I’m pretty sure people don’t do battle while bathing. I mean Man In The Bush once got into a wrestling match with a guy in the tub but let’s just say he quickly discovered his opponent wasn’t trying to fight him. Even after years of therapy, he still insists on showering with a bathing suit on.

Chinook Sugar Beaters (MT) – What has sugar ever done to you? You know other than make you a morbidly obese diabetic.

Doane Stuart School Thunder Chicken (NY) – Thunder Chicken was of course the lesser known cousin of the Thunder Cats. Unfortunately, his spin off cartoon series was not nearly as successful.

Tillamook Cheese Makers (OR) – Not sure if this is better or worse than being a Grape Picker.

Brush Beetdiggers (CO) – Okay this one is definitely worse than being a grape picker. No one likes beets.

Rocky Ford Meloneers (CO) – First of all, as a Rider fan you gotta respect a school that devotes itself to the watermelon. Second as if this logo isn’t awesome… a jacked up melon with his shorts pulled up to his armpits

And your undisputed winner… 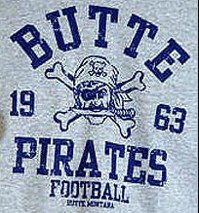 Man would it ever suck to be the victim of bullying at that school. Actually it turns out that Man In The Bush’s bathtub opponent was a Butte Pirate.
Posted by Rider Prophet at 8:00 AM

I am not sure if the team still exists, but Castor, Alberta had a sign for the Castor Raiders.

Wow talk about an epic battle! The Butte Pirates vs. the Castor Raiders... I think the survivors would envy the dead.