For the past several months I’ve been presenting the worst team names from across the sporting world. Tomorrow I’ll wrap up my salute with my personal favourites with the Best In Show category. For now, I will salute the also-rans.
Given the sheer volume of bad team names not all of them were able to fit into the previous categories but these were too good to pass up. In no particular order …
Milwaukee Bonecrushers (CIFL) – Finally a team name that would strike fear into opponents.
Greensboro Prowlers (defunct AF2) – Seriously why not just call them the Greensboro Rapists?
Omaha Beef (IFL) – Come to Omaha for the meatiest game day experience of your life. Cheer along with team mascot Sir Loin. Gaze in wonder at the Rumproasters, the professional sporting worlds’ first all male dance group. And if home games aren’t enough jump in the Meatwagon and hit the road for away games.
University of San Francisco Dons (NCAA) – This sounds like a team I wouldn’t want to mess with (either that or it’s a team where everyone’s name is Don).
Arkansas RimRockers (inactive NBA D-League) – Now I’m not an expert in the sex trade business but a RimRocker definitely sounds like something that a) I wouldn’t want to experience and b) is something you generally have to pay extra for. I believe it falls under the “if you have to ask, you can’t afford it” category.
Coquitlam Adanacs (WLA) – who would have guessed that a team that coined its name by spelling its home country backwards would make this salute. I can’t wait for their long awaited grudge match with the Kandahar Natsinahgfas.
Toledo Mud Hens (AAA Baseball) – A hen covered in mud is still a hen. In fact about the only thing that gets better when covered in mud is women’s wrestling.
Shawinigan Cataractes (QMJHL) – Means waterfall in French but sounds like an unfortunate eye affliction to Anglos.
University of Nebraska Cornhuskers (NCAA) – Is there anything in Nebraska but corn? That’s all they seem to talk about. Odd name but I guess it’s better to be a husker than a holer.
San Antonio Player Haters (former NIFL) – 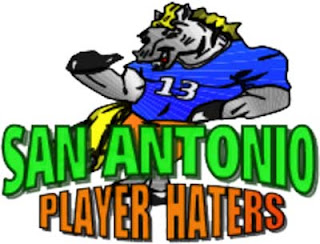 Okay, it’s bad enough that they decided on Player Haters as a team name but the fact that they then decided that the best representation of a Player Hater was a horse in a T-shirt makes it ten times worse.
Quebec Kebs (PBL) – 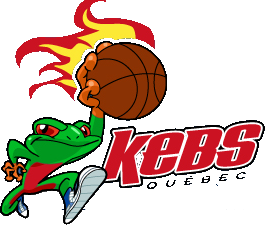 Not only did they pick a stupid team name, they also went with a frog as a mascot. Way to perpetuate derogatory nicknames. You don’t see Mexico City using a bucket of water being poured on a guy’s back as their logo.
Minnesota Ripknees (ABA) – 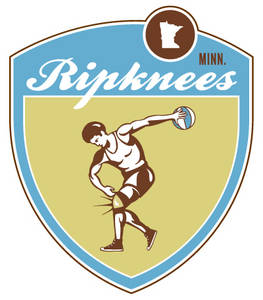 This is one of the oddest team name and logo I’ve come across. I don’t envy the guys who have try and market a team based around a lower body injury.
Posted by Rider Prophet at 8:00 AM