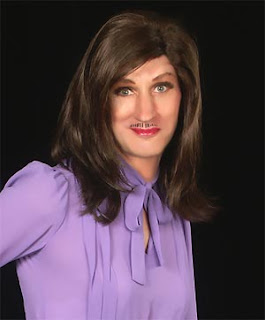 You notice that your uncle has just arrived to the reunion with a new girl in tow. This strikes you as odd since his divorce left him with a pot belly and an orange penis due to over indulgence of Cheetos and 1-900 numbers. But now he seems to be all cleaned up and the girl he just walked in with actually looks pretty hot. He sees you and comes over with his hot girlfriend in tow. But as they get closer you realize that this girlfriend seems to get uglier and uglier the closer she gets until your pretty sure that your uncle shaved a gorilla and dolled it up in some makeup and a sundress. A clear case of good from far but far from good. Paper bags and dim lighting would be this girl’s best friends.

On the surface it would seem that Edmonton has taken all the necessary steps to improve on the weaknesses of last year. They replaced their brutal head coach, brought in a marquee running back to help their non-existent ground game and rebuilt their porous defense. But if you dig deeper you realize that things aren’t as good as they appear.

While I have the utmost respect for Richie Hall, I have my doubts about is ability to be as effective a head coach as he was a D-Coordinator. Seems like a Danny Barrett type to me (to be fair though, that is a giant improvement over Maciocia). Jesse Lumsden is a band aid that will vastly improve their run game for 2.35 games before settling back onto the injury list. There are building a secondary around Scott Gordon and Kelly Malveaux and continuing to waste Kitwana’s talent at DE which I’m sure suits the other 7 teams just fine. Mo Lloyd is an impact player but given his fairly weak supporting cast he will have a lot on his shoulders. He may be good but he can’t do it all by himself. Most importantly, the Esks have very little depth. So while I expect them to start the season strong, when injuries start piling up we’re going to see them drop like Man In The Bush’s pants when he’s had a few too many.

Verdict: This is a mediocre team overall with very little depth. They will have to rely on Ray, Lumsden and Lloyd to carry them. While they are all among the tops at their position, there’s just no way I can see them being good enough to carry 39 other players in a very competitive division.
4th in the west at 8-10
Posted by Rider Prophet at 12:36 PM