Riders vs. Stamps: Get Your Game Face On


Saturday the 1-3 Riders take on the 2-2 Stampeders with second place on the line. Yes thanks to the wonders of the CFL we were able to go from a winless team to having a shot at second with just one win.
Since its the Stamps we are playing I think we should get in the spirit of things and do as their ad campaign says and get our game face on. Like this kid... 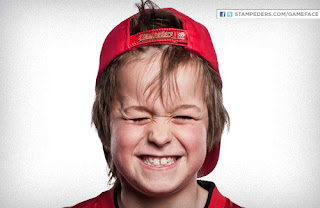 Whose game appears to be pooping.
Or this lady... 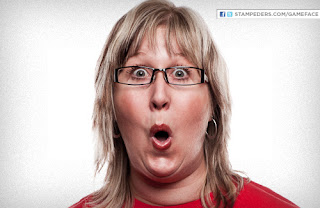 Whose game appears to be fellatio. (Odd ad campaign by the Stamps)
Anywho as for the game, if you had asked me before we beat the Als, I had this pegged as the team who has been playing like crap vs. The team that has been embarrassing themselves. Sadly that left the team that had been playing like crap with a distinct advantage. Needless to say I was pretty sure I would have to resort to the “drink until they’re pretty” approach. That of course all changed when we remembered how to play on Sunday.
The big question is of course whether Sunday was the start of better things for the Riders or just a fluke. Either way tomorrow’s match-up is one between 2 underperforming teams. The Stamps may have 2 wins but they have looked quite frankly bad in each one and could easily be 0-4 given how they played.
One of the major problems had been the fact that Henry Burris has been less accurate in his pass attempts than I am in my typing attempts. He seems to be bouncing a concerning number of passes off the turf in front of his receivers. This leads me to believe he has bad posture. A common problem among men his age. A simple solution would be a bro or manzier. I bet he could even find a black one to match his jersey... oh wait...
Other than Burris’ issues, the Stamps have also been hurt by the fact that they have the league’s least accurate kicker, an O-line that has allowed the most sacks in the league and the fact that they are by far the most penalized team in the league (you’re shocked about that last one I know). They also appear to have forgotten who Joffrey Reynolds is. But for all their issues, you still need to be concerned about an offense that boasts as many weapons as the Stamps... especially when your defense has only played one good game so far.
The Riders are a tough team to evaluate so far because they were a completely different team in game 4 then they were through the first 3. Overall though we learned that in order to win we need Durant to use his legs, our front seven to get big time pressure and lastly we need to cut Tad Kornegay. Through 4 games we actually have the best average gain per rushing attempt. In theory that should work to our advantage this week since the Stamps will be starting a new MLB with Juwan Simpson hurt. Problem is that its looking doubtful that Cates will play. Charles should still be able to chew up the yards (provided he actually holds onto the ball) and Brandon West may get a few chances to show what he can do.
Keys to victory are pretty much the same as they are every time we play the Stamps. On defense we need to keep Burris in the pocket and force him to pass with lots of pressure in his face. Without the ability to either run himself or hand off, Burris tries to be a hero and make big plays. That usually leads to turnovers, especially with JP patrolling the middle.
Offensively, we need to bring a strong running game and try and exploit the absence of Juwan Simpson. Generally Getzlaf is a Stamp killer, mainly because the interior of their secondary is crap. Just ask Ricky Ray and Fred Stamps how good their HBs are. If Getzlaf can continue actually catching the ball he should have another good game. We should also see a lot of man coverage which should mean good things for Getzlaf. As always though, it all begins with Durant using his mobility.
Expect a highly physical and tightly contested game between 2 teams trying to prove they are better than their records. It will come down to the wire. In the end...
Riders by a Durant rushing TD
Posted by Rider Prophet at 6:14 PM 1 comment:


If are considering making the trip Winnipeg this year to check out the Banjo Bowl, I strongly encourage you to check this out…
Major League Tours is once again organizing a trip to the Banjo Bowl. Package includes transportation, hotel accommodation and a game ticket all for a very reasonable price. 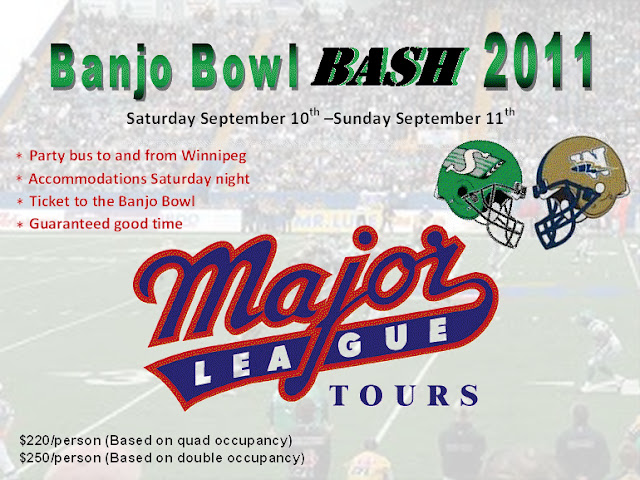 If you want more information check out their website at www.majorleaguetours.com
Posted by Rider Prophet at 6:36 PM No comments:

Monday Morning Sentimonies: Where Did That Come From?


Sunday the winless Riders travel to the land of poutine to play the undefeated Als. Objectively looking at things, unless the Als do the traditional French thing and surrender we are pretty much screwed.  I mean i have been racking my brains all week to think of a reason to be hopeful... but so far it’s been harder to find than a French woman who shaves her armpits.
I mean they have the league’s leading passer, leading rusher and highest scoring offense. We counter with the league’s most giveaways, lowest scoring offense, most points allowed, worst pass defense, and least sacks. But we do lead the league in one notable category: kickoff return yards (though that is only due to the fact that we get scored on so many times that we return kickoffs more than any other team. It’s a quantity over quality thing)
How’s that for a motivational speech? ... Don’t laugh I borrowed it from Coach Marshall.
Calvillo is playing like a man possessed this year. I’m pretty sure he just wants to make damn sure he will break all of Damon Allen’s record this year so he doesn’t have to come back for another year. Personally I want to see him break all the records early and then spend the rest of the season running nothing but QB draws to see how close he can get to Damon’s rushing records. I mean he’ll already hold every passing record worth holding, as well as the record for most times he or someone in his family overcame cancer (seriously at this rate it wouldn’t surprise me to hear that his kid got cancer over the offseason but beat it and Calvillo go on to have another ridiculously successful season) , why not try to add some rushing records?
Bottom line is, the Als are solid at pretty much every position. One guy who especially scares me is Brandon Whitaker. He’s making the Als look like geniuses for ditching that overhyped Cobourne. In the last game, the Argos covered everything deep leaving Whitaker open for like 100 receptions. Question is, given the Richie Hall soft zone mentality, how many more receptions will he get against us? The only weaknesses I can see on the Als is that their secondary isn’t anything special and Josh Bourke will be sitting due to injury meaning they will be starting a new tackle. But those are pretty minor in the grand scheme of things.
Of course no discussion of the Als would be complete without discussing their effeminate and testicular based names. It must be hard for the Als play-by-play guy to avoid sounding like he’s describing a gang bang: “Shea and Diamond are in the middle with Dix on one side on Cox on the other. Cox and Dix converge and nail the tight end and Diamond and Shea are there to clean up the mess.” Only in Quebec I tell you.
As for the Riders, its gut check time. They need to step up and show their testicular fortitude less they be emasculated by Montreal’s Dix and Cox (which really aren’t that big). They’ve already seen one of their cohorts get shipped out and if the rest don’t start improving their play they could be next. Its not about wins and losses, its about playing with heart (like Shane Falco). If all 42 players played with heart and 100% effort, the wins would take care of themselves.
The way I see it, if the Riders hope to compete with the Als they will need a huge game from Durant and Dressler.  Problem is that requires a receiver other than #7 to be good enough to pull attention away from Dressler.  Durant also needs to use his legs to extend plays, buy time for big passes (which the Als can be vulnerable to) and chew up yards.
Defensively Richie’s philosophy has always been eliminate the run and make team one dimensional. Problem is that would suit Calvillo, Richardson, Green and Bratton just fine as they are likely not intimidated by our secondary and would be content to carve us up through the air. Hopefully having James Patrick back will help stabilize that unit. Its damn near impossible to confuses a man who has literally seen every ever play invented over his career but we need to try. Disguise some coverages, do an homage to Etch and send a ridiculous blitz, anything to knock Calvillo off his rhythm. Calvillo gets rid of the ball quickly and even if he didn’t it’s not like our ends would get to him so our linemen need to get their hands up and try and block site lines and bat things down. Defense have a tough test but we’ve proven in the past that it can be done.
Overall I expect a better performance by the Riders (mainly because they really couldn’t get worse unless they forgot their pants and scored on themselves). There is a lot of heart in that locker room and they will come out looking to prove they aren’t the laughingstock they have seemed to be so far. That said, I think Montreal is just too good at this point. I can see us keeping it close but in the end we are trying to fight fire with a scented candle. We will move in the right directions and the wins will come... but not this week.
Als by 17
Posted by Rider Prophet at 9:46 PM 4 comments:

What Is Wrong With The Riders