Are You Smarter Than A Toddler - Week 1 Picks

Here are the Prophet family picks for week 1:

There is still time to get in on the contest just email your picks to riderprophet@hotmail.com. Full contest details can be found here. All you need to know is free to enter, cash prizes and child related gambling.
Posted by Rider Prophet at 1:42 PM 1 comment:

Twas just days before the season and the province was pumped up
Even more so than normal since we’re hosting the Cup
Expectations were high, only the best will do
Fortunately those standards don’t apply to me too
Where normally these rhymes just roll off my tongue
This year I’m struggling to even write one
But the show must go on for on me, you rely
So I’ll do it with the aid of my old friend rye
So bear with me as I prophecy on the White & Green
With my thoughts and predictions for 2013

Taman had loaded the roster, he’s gone all in
To hell with the cap, all we need is a win
In Foley, In Rey, in Weldon and Chick
In Simon, in Anderson… I still think he’s a dick
But for all the big names in our offseason haul
George Cortez will end up as the biggest of all
He will take our average O and make it scary
One of the top Os will be here on the prairie
Dressler and Sheets will be tops yet again
But Getz, Taj and Jock will join also the train
As for Simon he’ll be ok but here’s my guess
He’ll end up playing eleven games or less.
Bagg will play more and that I know is bold
And Darian will be back to the Durant of old
Through the air, on the ground he will score
Not just barely squeaking but points galore

On D we’ve completely changed front to back
Moved up Butler and moved back Brack
That experiment will be short lived, gone by midseason
They’ll be back in their old spots and with good reason.
The D will be aggressive and attack the O
FU Richie’s softness, this is the Chamblin show.
We’ll get lots more picks, but give up more yards
High risk, high reward is what’s in the cards.
Our aggressiveness will start down in the trenches
We’ll send a few QBs back to the benches
Chick will be a monster but won’t lead in sacks
Others will benefit from his relentless attacks
With Shologan and Foley our DL will be top rate
And George (once he’s served his game for headbutting Tate)
They will give up more but be fun to watch
Though at times they will make you want to shoot scotch

We will start with 2 quick wins and Riderville will have it made
Spots will be picked out for the inevitable parade
But the initial elation won’t last long
We will lose a few and things will start to go wrong
A high profile injury, struggles on both sides of the ball
Bench Durant! Fire Chamblin! Axe Hall!
These will be the cries of the midseason freakout
But patience will prevail and some wins we will sneak out.
At a game above 500 come Labour Day we’ll be stuck
Not sure who the Bomber QB will be but it won’t be Buck
Yet another sweep of Winnipeg will ensue
The bandwagon will fill up again as if right on cue
We’ll be strong down the stretch as things start to gel
Sadly part of this will be the return of Neufeld
Killed me to write that and you know what I’m meanin’
But he’s at least better than Heenan

So there’s my predictions but fear not if you don’t like
For in 5 years I’ve yet to be 100% right
So you’ll hear me exclaim to you my friend
Let’s hope I’m wrong about the end
Posted by Rider Prophet at 9:58 AM No comments:

Are You Smarter Than A Toddler? – CFL Pickem Contest

He’s a year older, a year wiser and back to embarrass you once again… 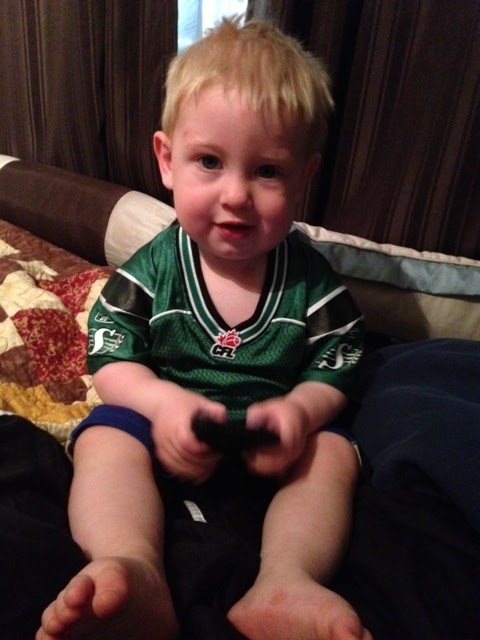 Back popular demand, it’s everyone’s favourite contest involving betting against small children. It’s your chance to go head to head with a 1 year old in CFL Pickem. Last year Prophet Jr. bested all but 2 would be challengers and he’s ready do it all over again.

Think you know CFL football? Well here is your chance to prove it with the Second Annual Rider Prophet Are You Smarter Than A Toddler? CFL Pick Em’ Contest! (had to modify the name this year)

Each week Prophet Jr. will predict the winning teams of all 4 CFL match-ups. Correctly predict more winners and you could win big prizes. But if you do worse than him you will be subjected to an endless barrage of ridicule and insults.

- $5 to enter.
- The person with the most points at the end of the regular season wins the pot
- If interested contact me by email to make payment arrangements (I can accept a wide variety of payment forms… but be aware that farm animals and sexual favours, or some combination thereof remain expressly not accepted)
Posted by Rider Prophet at 8:43 PM 1 comment:

Monday Morning Sentimonies: The Easiest Part Of Any Coaches Job


Between injury lists, the practice roster… and of course the cuts. The Riders have pared their training camp roster down to the final 46. Overall there was not a lot of drama or surprises coming out of the roster moves.

There was the somewhat surprising: Mick Williams (he got hurt in camp and watched as other DL recruits earned his spot, tough business).

The surprising to some but I called it a while back: Eddie Russ… look when you used to be a starting HB and they move you to corner for training camp it’s a very bad sign. It’s called the Lance Frazier treatment. The irony being that it was Russ who bumped Frazier last year.

And the actually surprising: Jose Valdez… look I’ll admit that bearing my endorsement is historically a curse that should be wished on no one. And I’ll admit that Valdez didn’t exactly dazzle in the preseason. But Heenan as our starting OT with zero depth behind him until Neufeld is healthy is scary. Heenan was not good. All he managed to accomplish in my eyes was make me less hateful of Neufeld. Taman says he is “massaging” the position which I assume means we will soon be trading a low round draft pick to someone or bringing someone else (that or Heenan will be the recipient of some questionable physical contact by the GM). Either way, in the short term that position is a concern.

I was bit surprised that guys like Ferri and Turenne stuck on but I suppose veteran depth isn't a bad thing... especially when you consider that we have so few actual LBs on the roster. Also surprised that both Davis and Coleman made it but I think George's suspension likely played into that decision. As a side note to those of you that forgot why George is suspended, think back to the textbook headbutt he delivered in the WSF. Think Koolaid man busting through a wall but just his head... ok maybe a bad analogy since Koolaid man is kinda all head.

The practice roster is as follows: Peters, Miller, Sumlin, Evans, Vonk, Anthony, Moore, Thompson (Jr), Matechuk, Regimbald. The one thing that jumps off the page for me is the number of Canadian on the PR (more than the min). As someone who has long worried about our Canadian depth I think this is great to see.

Lastly the new season is almost upon us and that means the return of the ever popular Are You Smarter Than a Baby contest. See next post for details. Trust me there is nothing  more fun (and eventually humiliating than betting against small children).
Posted by Rider Prophet at 8:24 PM No comments: