Forgive the lateness of this post, in addition to us winning the home opener, it also happened to be my birthday... so I had a few reasons to celebrate. Needless to say my sentimonies this morning were limited to pain-filled grunts. Oh man have I missed the feeling of my voice being absolutely shot.

Despite mother nature's attempt to turn the Riders into a water polo team, 19,000 strong showed up to Mosaic to witness a good old fashioned ass kicking to open the 2014 season. I say strong because all those people who stayed in their seats were tough as nails. One of the advantages of sitting up on the second deck is that we were dry as can be once we got to our seats. But full credit to those who withstood the waves of water they were pelted with.

I figured the Riders would do better in this game than many were expecting (particularly the offense) but I did not expect us to completely dominate the Ti-Cats like that. Our O-lines and D-lines were dominant, there's were not. Our QB was calm and dialed in, there's probably made the days of yelling at Henry Burris seem not so bad by comparison to Coach Austin. Those were the deciding differences in the game. Actually for a team coached by Austin, they looked woefully unprepared and unable to adapt. It was surprising. It wasn't just the elements, it was football fundamentals. They had no answer for our blitzes and seemed to have a deer in the headlights look every time we ran one. They have one of the better RBs in the league in CJ Gable yet he ran the ball 3 times... 3 times! They have premiere DTs in Bulke and Laurent yet you wouldn't know it looking at what Allen did (and he by no means a shift, speed back).

I won't spend too much time extolling the virtues of Anthony Allen... his game speaks for itself. I thought he showed great vision and that combined with his powerful north/south running and our O-line led to big gains all night. I also liked how he recovered from that early fumbled and played solid the rest of the game. Given that I thought Toston outplayed Allen in preseason evidently the coaches saw potential in Allen that they really liked and he fully justified their faith. I love the prospect of a big power back running behind our stud O-line

I have been high on Brett Swain all preseason and my borderline man-crush is proving justified. I see him being an integral part of the offense in the weeks to come.

Defensively, I think the only thing sadder than watching Hamilton try to block our pass rush was watching Troy Smith try and complete a pass. Before we get all crazy about our D-line dominance bear in mind that the Ti-Cats have O-line issues and their top OL (Dyakowski) is still hurt so some of what we saw was taking advantage of a weaker line. Still credit to our DL they looked fierce. Walker looked solid at DT and the nonexistent run game and sack totals would indicate a job well done. If they can keep up the strong play along with George, then Chick and Foley may be in for big seasons. I also thought Hurl and Peters looked good. And our secondary should have have way more picks then they did, they were in great coverage positions all night but just couldn't squeeze the ball (on a dry day, the results could have been even worse for the Ti-Cats).

The Ti-Cats must be glad they do not have to return here until next year because they have
been flat out embarrassed here over and over again. I don't think they are as bad as they looked and I don't think we will be as dominant as we looked but I love what I've seen so far from the 2014 Riders.

Other random thoughts:
- How awesome was it to have not only Jerrell Freeman but also Weston freakin' Dressler in the house!!

- You knew it wasn't Hamilton's day when they managed to even screw up us missing a FG... for the record that kick never had a chance of making it , not sure why we even tried.

- Ainsworth had a solid day on special teams


- I was honestly surprised that the Riders didn't buy Canadian Tire our of rubber boots, stick Rider logos on them and sell them at a ridiculous mark up... opportunity missed.

- I'm sure more than a few people were wondering why we let Jordan Sisco in at QB late in the game.

Twas 7 months since the Grey Cup and there was much debate
“Where is Prophet with his predictions? It’s getting quite late
Does he not know that the season is starting?
Shouldn’t he be here making jokes about farting?”
Last year was surreal but the fans want to know what’s in store.
Should they be happy with one Cup? Could they hope for more?
Well fear not faithful readers, for I am here
To prophecy on what will occur this year.

It’s back to reality, the Grey Cup hangover has ceased
There have been departures, we are no longer the beasts
Gone Sholo, gone Butler. Sheets and Dressler too
But it’s not all bad news, Sisco’s gone too.
We’ve got holes to fill, our roster is less stacked
But that’s no reason why you shouldn’t be jacked.
Our core is still solid, some second to none.
We’ve got all the tools to make another run.

With Cortez making calls, Durant will continue to be a star
Under DD’s leadership the offense will go far
We’ve got less big names but that’s no reason to fret
We will still have a top 3 offense I bet.
Taj will set new career highs as the go to guy
Getz will get another 1000 but at times make you need rye
The other receivers will share the ball
They’ll all get their touches but Swain will the best of the all
Toston will provide a credible run attack
At least until September when Sheets will be back.

Defense will need to be our strength and win us some games
As the offense goes through early growing pains
I would put our secondary up against any one
They’ll have the most INTs when it’s all said and done.
We will show early weakness up front and get burned by the run
Richie Hall will be cursed heavily by some.
But someone not on our roster will step in at DT
And Kilgore will be solid upon return from injury.
The battle for top defensive player will be
Between Weldon Brown and Ricky Foley

On teams our coverage will start shaky but improve
Woldu and McHenry will lead them back into a groove
Milo will be rock solid and as for Bartel
His kicks will be so good that “Crikey” will we yell (for that line to be even remotely humorous you need to say Crikey in your best Crocodile Hunter voice)
As for predictions on teams, I’ll give you one more
Marshay Green will take a kick to the house by game 4.

We will start slow and people will doubt
They’ll be happy with last year and count us out.
At 3 and 4 most will admit defeat
And give up on the dream of a repeat
But the players and coaches will not give up
They will not be satisfied with just one cup
The roster will be tweaked and our record will start mending
And from the down in the standings we will start ascending.
Though we will be counted out early we will finish 2nd. Great!
A home playoff game at 10 and 8.
In what will seem like déjà vu, the Lions we will slay
In the West Semi on a cold November day.
Then it’s back to Calgary, a familiar scene
Some speckles of red amidst and sea of green
It won’t be as dominating as last year but we will again prevail
With Durant leading by action, we will not fail
Then it’s off to BC Place with a dynasty on our mind.
It will be the Argos as opponents we will find.
The game will be close but we will fall short in the end
Our championship status we will not defend.

So that’s how I see 2014 going, cue the ovation
An up and down season that exceeds expectation
But don’t worry that I’ve picked a sad end, that’s alright
For in 7 years of predictions I’ve never got the end right
So in predicting that we won’t win the Cup
The odds of us doing so has actually gone up.
Posted by Rider Prophet at 6:00 AM No comments:

Are You Smarter Than A Toddler - Week 1

There is still time for you to get entered into the contest. Free to enter, cash prizes. Just email your week 1 picks to Riderprophet@hotmail.com by kickoff on Thursday
Posted by Rider Prophet at 8:32 PM No comments:

Are You Smarter Than A Toddler 2014 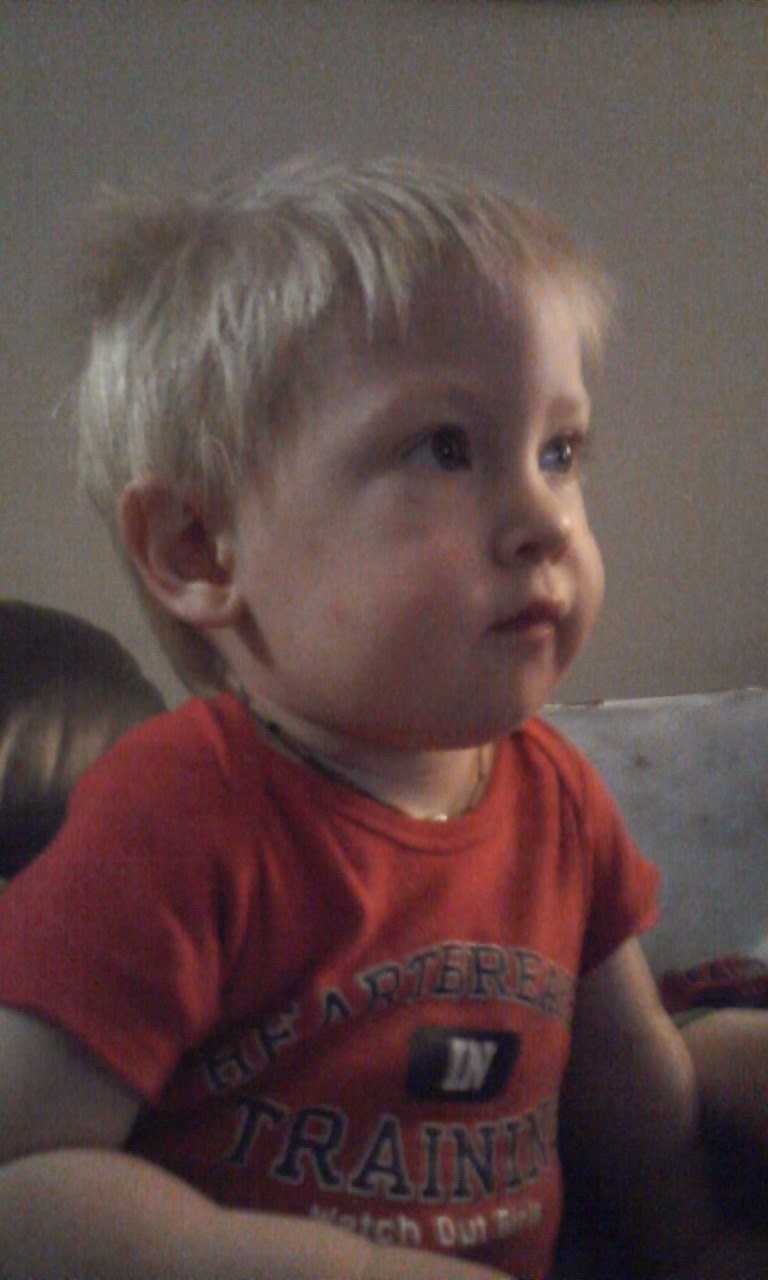 That’s right it’s time for everyone’s favourite child related gambling contest Are You Smarter Than A Toddler. Your chance to go head to head with a 2 year old in CFL pick em’. There will be prizes for the winner and much public shaming of those who lose.

Each week Prophet Jr. will predict the winning teams of all 4 CFL match-ups. Correctly predict more winners and you could win big prizes.

Rules are as followed:
- Contest is free to enter. Simply send an email to RiderProphet at hotmail.com
- Each week I will post Prophet Jr.’s picks
- Each week you submit your picks by email
- You get 1 point for each correct pick
- At the end of the regular season, whoever has the most points overall will win the $50 grand prize.
- Also, every person who has more points than Prophet Jr. will be entered into a draw for an additional $50.

All prize money is coming from Prophet Jr’s college fund so if he can’t afford post-secondary education, he has no one to blame but himself.

- $5 to enter.
- The person with the most points at the end of the regular season wins the pot
- If interested contact me by email to make payment arrangements (I can accept a wide variety of payment forms… but be aware that farm animals and sexual favours, or some combination thereof remain expressly not accepted)

Season kicks off on Thursday so be sure to get yourself entered and your week 1 picks in ASAP.
Posted by Rider Prophet at 4:48 PM No comments: