Fresh off the fantastic news that the players have ratified the new collective bargaining agreement, it's time for my first game preview of the year! Woooo!

Saturday we get to return to the hallowed Mosaic turf for the opening game of the 2014 season. Sure technically this is a home game for OTTAWA (Do I really have to yell their name every time? I'm still not sure on the protocol here) but outside of the fact that the stands will be empty, there will be nothing to make you think this is a home game for an Ontario football team. Though I do expect someone on the East side to mistakenly start razzing the Riders' bench purely out of instinct.

As with most preseason ball, its likely to be mediocre at best football and the results of the game are about as useful as Toronto Blue Jay playoff tickets (yes I realize they are currently in first but they will find a way to blow it). That said, I still love preseason football. For one, its football! Something I have been desperately lacking more many months. For 2, its a chance to see the new recruits in action. And for 3, its an excuse to drink... as if you really need an excuse.

In no particular order here are the things I will be looking for:
- Obviously RB... true test of an RB is his play making abilities when the game is going full speed. Curious to see whether Allen, Toston, Thomas or one of the others start to separate themselves from the pack. Also curious to see if anyone pulls a Quentin Griffin and manages to get themselves cut before the sun sets.

- Also obviously WR... 2 of Swain, Schillens, Riley and Ryan Smith (aka the guy we will just call new Dressler because he's short, white and from North Dakota) will be starting for us come opening day. Really interested to actually see them in live action.

- For me the number 1 thing I will be watching is run defense (specifically the DT and MLB spots). Our secondary is going to be awesome. We will have great pass rush off the edge from Chick and Foley. Quite frankly our pass defense does not concern me. It will be smothering. But it will all be for not if we can't stop the run. We need to replace a DT and MLB both of which are the key guys in terms of run-stopping. If we can solidify those positions then our defense will dominate this year. So I will definetly have my eye on Sumlin, Guyton, Eddins, Walker, Ivy, Hurl and of course the Rider Prophet endorsed Chad Kilgore.

- Our OL is clearly set but the back-up plans interest me. When you start a Cdn at tackle you need to be mindful of how to replace him should worse come to worse. Best and Labatte can slide out in a pinch but we need to find a reliable back-up plan at tackle (even if it is an import).

- Special Teams tacklers will be interesting to watch. We lost Butler and Newman who were 2 of our better kick cover guys. Need new guys to step up and take on that role with the same pride and intensity they did.

- Brian Peters. He's been getting a lot of hype this training camp and I think he has the tools to live up to it. Interested to see how he does.

- Cdn receivers. We need a back-up or two and the competition is stiff. Jade Etienne will be cut soon (at least I assume... unless he gets one of those nasty 9 game hangnails). But Thompson, Pierzchalski, Bastien and ...uggg Sisco are all still in the mix. Second half will be their time to shine.

- Dylan Ainsworth. This was our prize acquisition in the draft. Curious to see what he brings to the table, especially on special teams.

- I will also be mildly interested in how the rEdBlAcKs look (still wrong?). Be hard to tell given how parred down the playbook will be but they have a steep hill to climb in building team chemistry from scratch. Curious to see how that is coming along. Also curious to see how many children run crying to their mothers when they see the "friendly" axe wielding maniac mascot. 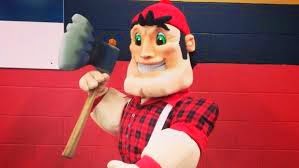 I can't guarantee I will be at the game in person. As of yet I have no ticket. I'll see if I can get a cheap one on gameday but otherwise will just listen on the radio unless for some reason they don't black the game out in which case TV it is. Don't get me wrong, I love live football but my price point for a 2nd preseason game is lower than what the Riders expect me to pay.

But whatever way you will be taking in the game, I think we can all agree that we are just happy football is back.