Yesterday, Jason Clermont confirmed his long speculated retirement from the CFL. It marked the end of a truly remarkable 10 year career.

Its tradition here on the blog to do a salute to Rider greats when they retire. Now Clermont’s time as a Rider hardly qualify him as a Rider great (in fact he’d probably like to forget most of the previous 3 season with the exception of the increase in his realty business) but what he achieved overall in his career definitely qualify him as a CFL great… and thus he is salute-worthy.

But with Clermont it wasn’t just about what he accomplished… but rather how he accomplished it. He was not a flashy, highlight reel-type receiver like his long-time teammate Geroy Simon. He was a tough as nails fearless grinder with a work ethic that was second to none and built like a freight train. In his prime, he was one of the best possession receivers over the middle. QBs could count on Clermont like clockwork to go over middle and haul in pretty much any pass in his general direction.

The only thing that would have been better is if the Regina product could have spent his best years treating his hometown fans to his abilities rather than the hated BC Lions.

It’s also a shame that such a great career had to have such an unspectacular finish. Expectations were high when Clermont finally signed with the Riders but a combination of a stable of young emerging Canadian receivers (Fantuz, Bagg, Getzlaf) and the fact that I’m still convinced Ken Miller hated Clermont for some unknown reason kept Clermont from ever accomplishing much as Rider. Off the field though I suspect he had a huge impact in the locker room mentoring our young receivers and being a strong veteran presence during the Cup runs of ’09 and ’10.

His minimal on-field contributions did not stop the fans from adoring him as evidence by the standing ovation he got every time he caught a 4 yard pass.

So congratulations to Clermont on a remarkable career and all the best in retirement. I’ll end with my top 5 memories of Clermont.

5 - Cyborg-like healing abilities
In 2006, Clermont suffered a major knee injury which would have ended the average player’s season or at least put them out for a significant amount of time. Not Clermont though, miraculously he missed like 5 games and was back doing his thing.

4 – Grey Cup 2004
In 2004, Clermont turned in a great performance in the Grey Cup and was named the games Most Outstanding Canadian despite the fact that the BC Lions lost. Steve Armitage interviewed him right after the award was presented and asked “is this a dream come true?”. Clermont replied “I never really dreamed of losing the Grey Cup”.

3 – Dry Humour
Not enough people truly appreciated Clermont’s wit and humour. He was very dry and sarcastic but his tweets and short-lived column in the Leader Post were must read material and never ceased to crack me up. My all-time favourite will always be his Labour Day article where he explained the terms “making it rain” and “stacks”.

2 – Toughness
I already talked about Clermont’s toughness. Rather than go on about it, I will let Clermont’s work speak for itself. This highlight epitomizes just how tough Clermont was…

1 – The TD
While Clermont’s career as a Rider had few highlights, this moment will be forever enshrined in Rider lore. It is among the most exciting moments I’ve ever experienced at Mosaic.

This is image that will forever be etched in my mind when I think of Clermont as a Rider. 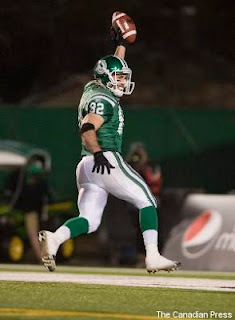 Posted by Rider Prophet at 7:02 PM

I watched him play for the Rams. I remember one play in which the Rams were down by less than 7 with about a minute to go. The Rams had just scored and were kicking off. Short kickoff obviously. The Rams 'hands team' tipped the ball into the outstretched arms of JC who ran it in for the winning touchdown. Wow!

We observed himDiablo III Gold or her play for that Rams. Walking out to a single play the location where the Rams were all the way down by simply below 8 approximately a fewCheap Guild Wars 2 Gold minutes to look.