It’s that time again… that time where I artificially create filler posts to get through an offseason with limited actual stuff to talk about… also known as the Rider Prophet Awards. This year the awards have the added bonus of being more prestigious and relevant that the NHL awards. I actually asked Gary Bettman to borrow their awards for this since they wouldn’t be needing them but he ended up locking me out somehow. We have talks scheduled for next week… also TSN will be doing an all day special about the progress of those talks for some reason.

What my awards lack in actual trophies and being desirable to win, they make up for with… err… umm well they aren’t as excruciating as the Emmy’s and the results are more relevant than the Tony’s. This year’s winners will receive an all expense paid trip to Man In the Bush’s house, their choice of items from the mall lost and found box and an autographed picture of the Rider Prophet to commemorate this occasion.

Best Player Name
Anyone who followed my blog or twitter feed this season will clearly know who this year’s best name goes to. Previous winners in this category have had names that entertain me, but this year’s winner took it to the next level by inspiring an ongoing set of jokes and hilarious (at least in my mind) potential headlines. Ladies and gentlemen you best name of 2012 goes to the Riders’ own Drew Willy.

Our honouree declined to accept this award in person, turns out the whole idea rubbed Willy the wrong way. I guess Willy prefers self-gratification over strangers tooting his horn.

Quote of the Year
It’s common for comments said by people across the CFL to irk some people, but it’s truly rare for something someone says to incite outrage league wide… particularly when it doesn’t involve racism (yes I’m not going with Khalif Mitchell here though he did have a couple doozies). This year’s award for quote of the year goes to Bomber GM Joe Mack for using the following statement to explain why him team was sucking beyond belief.

"We've had a fairly rough year for the psyche of the team. It started with the death of coach Richard Harris. I knew that would have a big impact on our players. As I reflect back... it had a much bigger effect on the psyche of the team than I even realized. And there were other things that maybe compounded that. There were things beyond the team's control."

Memo to aspiring GM’s attempting to gain sympathy for your ineptness by saying your team’s poor play is due to coach that died a year ago is not a good idea. Mack earned himself the ire of pretty much everyone in the country and that is why he is deserving of this honour.

Play of the Year
Normally this award goes to marginally talented people who I can scarcely comprehend how they found employment as a professional football player (case in point, Ryan Dinwiddie won last year). However this year’s award goes to one of the more talented people in the CFL: Chris Williams. I’m not sure if he just got bored by returning so many kicks for TDs or if he momentarily forgot he was playing on the bigger Canadian field but this year’s play of the year goes to this:

Botched Call of the Year
It was hardly a year for officials to brag about (though I guess to be fair they were a step above the NFL replacement officials), inconsistency and questionable calls became the norm. While there were literally hundreds of potential nominees, the one that sticks out in my mind from this season came in a home game against Toronto.

Darian Durant was at QB late in the game needing a TD drive to win the game, he took the snap and dropped back looking for a pass. Meanwhile Brandon Isaac came on a blitz and nailed Durant with a dirty head on head hit. No worries though as the ref assigned to watch for such blatant infractions saw it and instituted the appropriate penalty… oh wait that’s what should have happened. What actually happened was the said ref was too distracted by the swirling ripped up 50/50 tickets or day dreaming about how vertical stripes are slimming. He somehow missed the blatant head shot and accompanying thundering crack of their helmets that happened right in front of him on the person he was being paid to watch. It was so bad that the League instituted a one game suspension on Isaac (and this is a league that goes out of their way to avoid suspending people).
The Commercial I Didn’t Get Sick Of Seeing Even Though TSN Made Me Watch It 54,297 Times Award
Honourable mention to Flex-Seal for teaching us that when in doubt you can fix a boat with a screen door but this year’s winner was far and away this contribution from Mr. Lube. It just never got old.

Fans Choice Douche-Bag of the Year
You the fans have spoken… and in records numbers I might add as we had the most votes cast in the 6 year history of this award. It probably had something to do with it being a banner year for douche-baggery in the CFL. But above all the other run of the mill douche bags, with 50% of the total votes you have chosen to award Jon Cornish as the 2012 Fans Choice Douche-Bag of the Year. 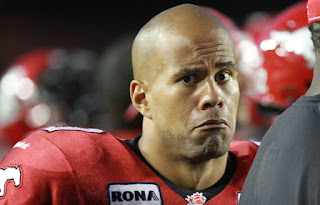 It was probably the mooning thing that put people over the edge but Cornish just seems to give off this vibe that makes people dislike him.

Interesting to note that Cornish becomes the 3rd Stampeder in a row to earn this dubious distinction.  I’m sure you’re all shocked by that.

Usually I can see potential winners in this category coming a mile away. Generally the nominees come from my long-standing hatred list (such as 2 time winner Michael Bishop). But this year’s winner is a bit of surprise to me. Not because he is undeserving but because if you would have asked me at the start of the season he would not have even been on my radar (that said Mrs. Prophet has hated this guy even since last year).

This person received an offseason extension and accompanying huge pay increase. Unfortunately the size of the increase was proportional to their drop in play. When he wasn’t busy dropping easy passes, he spent his time going offside and being the target of passes that were intercepted. I am talking of course about Chris Getzlaf who caused me to curse more than anyone this year and also inspired a motto “Nothing good happens when you pass to Getzlaf”.

For me the clincher was when he was booed off the Mosaic turf. Do have any idea how much you have to suck to be a hometown Regina Ram product and get booed?!? For god sake we gave standing ovations to 2 yard passes to Clermont and -1 yard runs by Stu Foord. The bar is not set that high. But somehow Getzlaf managed to set a new low. All for the low price of $120,000… the same price we pay our super midget who is one of the best receivers this franchise has ever had.

For inspiring more insults and profanity in my household (most of which came from Mrs. Prophet), Chris Getzlaf is this year’s Most Insulted Sports Figure. 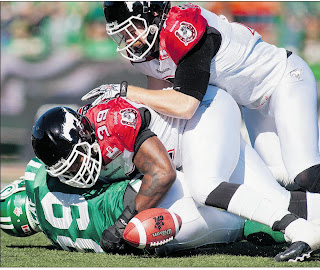 Wow - 120 k ? That's bad . Getzlaf needs to take a paycut and they should give the extra money to Dressler. Unbelievable .

We hope that a frank and candid manner to inform the progress of this project to the community.