The year was 1994 and Bernie Glieberman needed something to occupy his time between running the soon to be defunct Ottawa Rough Riders into the ground and running the not yet operation but soon to be defunct nonetheless Ottawa Renegades into the ground.
Gleiberman was the owner of the Rough Riders at the time and determined that the reason his team was so bad had nothing to do with his ownership or the ridiculous decisions made by his son Lonnie. No, clearly the Rough Riders’ problems were the result of the team being in Ottawa and not somewhere in the States and so he told the league he wanted to move the team south. The CFL did not want to see the end of one of the most storied franchises in the leagues history (little did they know it was pretty much inevitable) so they ended up cutting a deal with Glieberman whereby the Gliebermans got an expansion team in Shreveport and got to take players with him while a new ownership group got the scorched remains of the Rough Riders (name, logos, colours, history). 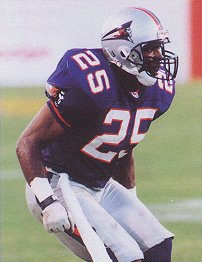 Years in the League: 1994 – 1995
Overall Record: 8 - 28
Notable Players: John Heidenreich (who went on to become a successful professional wrestler), K Bjorn Kittmo, DL Joe Montford, DL Elfrid Payton, OL Uzooma Okeke, WR Curtis Mayfield
The Good
- umm… err… they somehow managed to stay in the league for 2 whole years.
The Bad
- The team hired John Huard as their head coach only to fire him during their inaugural training camp.
- During training camp, the players were housed on the second floor of a livestock barn.
- They only managed 8 wins over 2 seasons making them the least successful expansion team ever.
- “The Great Tucker Caper” – By the end of 1995 Glieberman owed the city of Shreveport a lot of money so they tried to seize is vintage 1948 Tucker as a result. Glieberman’s lawyer tried to skip town in the car and hide it but ran out of gas and was picked up by the police before he could complete his mission.
Fate
Team folded following the 1995 season.
Video Evidence
Note how full the stands are throughout
Posted by Rider Prophet at 7:40 PM

Geez, this team brings back memories. When I was 9 years old, Shrevport and the Riders were my favourite game.Teams were in the basement in the standings, and the Riders tended to come on top! Thanks Prophet for allowing me to "reflect" on a bit of my childhood (as a young Riders fan) and keep up the good work.

Riders and Shreveport? wow you must be a glutton for punishment.