In 1993, Sacramento became the first American team to join the CFL. They were actually supposed to be one of 2 teams (the other being the San Antonio) to join the League in 1993 but the latter folded before it even really got started when the owner ran out of money (a telling omen of how the whole US expansion thing would go). The Gold Miners came from the remnants of the Sacramento Surge of the World League of American Football.
Years in the League: 1993 – 1994
Overall Record: 15-20-1
Notable Players: QB David Archer (that Rider-hating SOB), WR Rod Harris, DT George Bethune, RB Mike Pringle, RB Mike Oliphant, QB Kerwin Bell 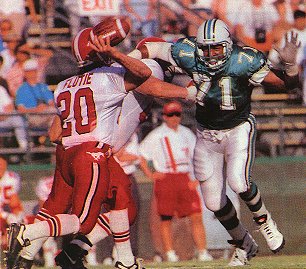 The Good
- They forever etched themselves in the CFL record books by becoming the first American team to defeat a Canadian team… by beating the Saskatchewan Roughriders (pauses to silently shake head in disgust).
- They had some decent talent on their team and showed signs of improvement over their 2 years
The Bad
- Their “stadium” sucked. Most of the seating was grandstands and the closest thing to amenities provided were port-a-potties
- Attendance. They had to give away close to 2000 a game to make the crowds look more respectable… you know relatively thinking.
Fate
The team relocated to San Antonio following the 1994 season.
Video Evidence:
Here's a clip of a '94 match-up against the Stamps.
Posted by Rider Prophet at 9:49 AM

I remember watching them in Taylor Field and here them chant as Rigeway prepared to kick "miss, miss, miss". Robokicker didn't miss.

I have one of their pennants which I found in the Cdn Football HOF in Hamilton.

They had a great owner who really believed in the CFL. After the shutdown of US teams he was still willing to go on but he had no opponents.

They were the first in the league. I seem to remember laughing at them for their preference for humongous but slow o-linemen. Even Ottawa made Archer into mush.