Sunday Scott Gordon called it quits after 9 seasons in the CFL. While he may not have been the most prolific or popular player, he did leave his mark on the Riders and on myself. And so as he sets off into the sunset we take a took back at the legacy he leaves behind.

Gordon was shipped to Hamilton as part of the deal that allowed us to draft Kerry Joseph in the dispersal draft (a small part of the deal, but a part nonetheless). He proceeded to unleash his patented fury on the East division, with safety blitzes such as the one pictured here… 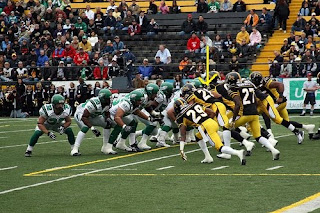 Whether it be as the disgruntled orderly in Happy Gilmore or the zany Derek Zoolander, Scott Gordon’s characters were always entertaining. 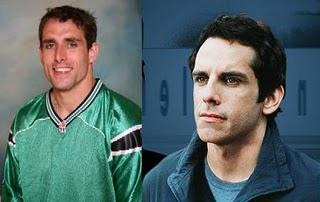 When the Riders went in a different direction at safety (i.e. talented), Gordon packed his bags and followed Coach Hall to Edmonton. He proceeded to unleash his patented fury on the City of Champions, with safety blitzes such as the one pictured here… 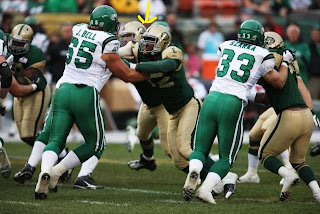 While he may not have been the best coverage guy in the league (as evidenced by his 2 INTs over 7 years as a Rider), Gordon was a punishing tackler. You were probably going to make the catch on him but you were going to pay a big price for doing so. 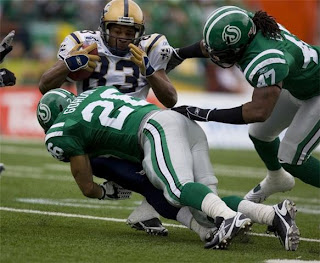 Though I made jokes at Gordon’s expense, I have to admit I enjoyed having him on our team. He wasn’t a game changer but he rarely ever hurt you by being out of position. He was also far better then some of the others we auditioned in his place.

So long Mr. Gordon you will be missed… most notably we will miss when you unleash your patented fury on the Taylor Field turf, with safety blitzes such as the one pictured here… 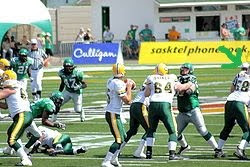 Posted by Rider Prophet at 6:39 PM