The punter is among the least heralded of all the players on a football team. Such was not the case for Jamie Boreham. I’ll admit that when we acquired him from Hamilton I was pretty skeptical but he quickly won me over with his aggressive hard hitting play. And so it is with a heavy heart that I bid farewell to the man that I came to call The Juggernaut 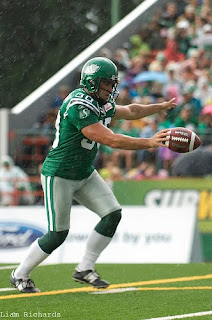 5. Kickoffs
Though it was an odd thing to excel at Boreham was consistently one of the best kickoff guys in the league.

4. Kicking On the Run
While he wasn’t the league’s best punter under normal conditions, no one could match his ability to kick into the wind on the run. He obviously missed his calling as a rugby player.

3. Hard Hitting
In a position traditionally reserved for wussies and those otherwise too weak to survive physical contact, Boreham broke the mould. He would run and hit just as hard as the linebackers who lined up beside them. Many an unsuspecting returner was hammered by the Juggernaut.

2. Gimme The Ball
Most punters ensure they kick the off and hang back as a last line of defense should the returner make it past the other 11 coverage guys. The second the ball was off his foot Boreham would set off on a mission to get it back. More than once he succeeded in his quest. 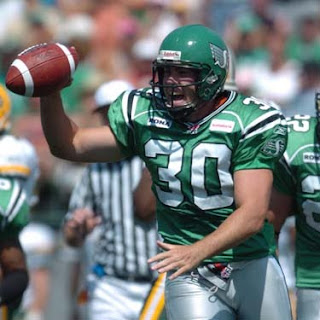 1. Last Impression
The Juggernaut saved his most memorable moment for what turned out to be his final game as a Rider when he sent Ryan Grice-Mullen on the ride of his life. Re-live the awesomeness at the tail end of this clip.


Best of luck to you Juggernaut. You will always be one of my favourites.
Posted by Rider Prophet at 7:30 AM