Usually by this point of the offseason the lack of actual player news leaves me commenting on curling, discussions on whether it was a pimple or a boil and pretty much anything just to fill this space... and by that I of course mean that I put tireless effort into each post regardless of the time of year to ensure a positive reading experience for my fans... any chance you are buying that? No? Didn’t think so. Well it was worth a shot.
Anywho, this offseason there have been enough big stories to so far tide me over. Last week it was the Lingerie Football League and this week it’s the announcement of a $14 million upgrade to Mosaic Stadium. The plan will see the installation of 5000 new fancy temporary seats in a bowl style in the endzones, add corporate boxes and add new jumbotrons. This will be phase 1 and look like this: 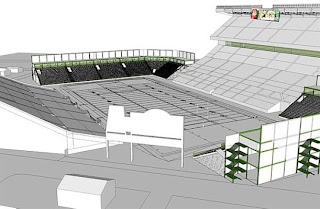 Then next year when the Grey Cup is here they will expand overall seating by adding second decks to the new temp seats pushing capacity to 50,000 for Labour Day through the Grey Cup. It will look like this: 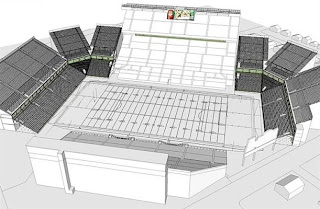 Then in 2014 the 2nd deck will be removed and we will be back in the bowl style 33,000 capacity format until the new stadium is ready at which points the temp seats will be sent off the football fields around Saskatchewan to support amateur football.
Now this should have been nothing but positive news but it has unfortunately been sullied by a bunch of assuming and misinformation regarding the prospects of a new stadium. And when misinformation and stupidity in the football world abound, you know what that means... it’s time for another installment of Addressing Uninformed Opinions aka Everyone is Stupid But Me.
Uniformed Opinion #1 – This means we are not getting a new stadium.
Clearly you missed key parts of the announcement like “temporary seats” and “seats to be taken down and distributed across the province”. Or maybe you just assumed that this was bizzaro world and temporary meant permanent and “torn down” meant “left there forever while the kids of Swift Current cry that the stands Jim Hopson promised them are never coming”. This is a temporary thing that was needed for the Grey Cup and is only meant to tide us over until the stadium is ready.
The only way we are not getting a new stadium is if people vote for the hippie mayoral candidate who doesn’t support the stadium.
Uninformed Opinion #2 – It’s a waste to pump $14 Million if we are just going to demolish it in 4 years.
On the surface I will agree with you here (aren’t I a nice guy?) but you need to dig deeper to see the economic sense. Fact is we needed temp seating for Grey Cup. Believe it or not the CFL would not have awarded us the event if we didn’t promise to expand seating a ton. So given that we would have had to pay for that anyway the team wisely decided to try and make it a more profitable investment. So instead of just getting the increased capacity for Grey Cup we are now also getting an additional 5000 seats per game for 4 years, which should  mean more $$$. We are also getting more corporate boxes for 4 years which are a cash cow for sports teams hence more $$$. So the team is turning a necessary expense into what should be a money making venture. It’s actually smart business. After a year of witnessing countless stupid decisions on the field, we should feel somewhat reassured that the team is still making good decisions off the field... you know minus the giving Taman complete control thing.
Also it’s not like we are just going to throw out the new jumbotrons in 4 years, I’m sure they will move them to the new stadium so it’s not a wasted investment. Then again if they are planning to throw them out I may just have to go dumpster diving... my house could use a 60 foot TV.
So in conclusion, upgrades = good investment; temporary actually means temporary; and stadium still a go unless people of Regina vote like idiots.
The good news on that last point is given that voter turnout for municipal elections is embarrassingly low, given that me and Mrs Prophet plan on voting for a pro-stadium mayor that should pretty much make it a lock.
Posted by Rider Prophet at 7:00 AM

Those corner seats look awesome, can't wait to pay $100 for one of those.

But just imagine how comfy the seats will be.

That will be the trade off: new stands = crappy view but nice seats, old stands = good view but crappy seats.