If you spend enough seasons following the CFL, you learn to get used to odd things happening. It’s kinda the norm that at least a couple things per season will make you go “What the Hell?!”. You know like the Ricky Williams saga, or David Braley owning 2 teams or the League not really being sure whether Fantuz was eligible to play in the last Labour Day Classic or not. I’ve come to accept these crazy quirks. That said, despite all this, there are something’s that completely blow my mind… One of those is how people keep hiring Jim Daley.
Don’t get me wrong I’m very happy that one of our CFL rivals was stupid enough to hire him (and in doing so officially handicapping a part of their team for the upcoming season). But I simply don’t get it. Sometimes coaches get hired that may have a black mark or 2 on their resume but at least they generally have some previous tangible success that helps to rationalize the hire (Richie Hall comes to mind). Not Daley. The man seems to be immune to the rules of employment that seem to govern the rest of society. As George Cortez indicated the man does have 16 years of coaching experience in the CFL… but none of it is good. If my employment history was as awful as Daley’s I would be living in a van down by the river (or in a management position with the Maple Leafs).
In an effort to try and understand the Daley phenomenon, I decided to go back in his resume and try and pinpoint a reason why people keep thinking he is such a great hire in spite of the pile of evidence to the contrary.
Starting at the beginning before the CFL, Daley did win a National Junior Champion with the Ottawa Sooners of the CJFL in 1984. He was also head coach for the Ottawa GeeGees where he was name Coach of the Year in both ’84 and ’88. Okay, so I can understand why he was first hired into the CFL. At this point so far, so good. Now here’s a rundown of his CFL resume.
1991 – Special Teams/RB Coach, Ottawa – Team went 7-11. Nothing particularly good or bad to report, a rather inauspicious start.
1992 to 1993 – D-Line Coach, Ottawa – Team went 9-9 followed by 4-14 (notice the sharp decline).
1994 to 1995 – DC, Saskatchewan – Team went 11-7 followed by 6-12 (again note the pattern of decline).
1996 to 1998 – Head Coach, Saskatchewan – Choosing to ignore the repeating patterns of decline, the Riders gave Daley his first chance as HC at the pro level. To say the least things went awful: 5-13 in 96 and 98. There is of course the miracle Grey Cup run of 1997 that to this day academics, scientists, philosophers and sports pundits are unable to explain. He rode the Slack Attack to an improbable playoff run culminating in a far more probable ass kicking by Doug Flutie. All in all, few were sad to see Daley go (except maybe the other CFL teams).
2002 to 2002 – D-Line Coach, Calgary. Though he did get a Grey Cup ring with Cortez in this stint, a closer look at the Stamps’ record shows a familiar pattern. The team went 12-5-1, followed by 8-10 and 6-12 (yet again note the familiar decline, by this point it can hardly be considered coincidence).
2003 – DC, Calgary – Team went 5-14 and finished 4th in the West… though I’m sure the fact that Daley was responsible for a significant portion of the team was just a coincidence.
2004 to 2005 – Head Coach, Winnipeg. Leave it to Taman to give a hack like Daley a second chance as HC. He went 5-6 after taking over for Dave Richie mid-season, followed by 5-13 and dead last in the West in his first and only full season as the Bombers’ HC.
2007 to 2008 – CFL Director of Officiating Development. While I won’t go as far as to say that Daley was a failure at this role as well, I will note that his time in this role did coincide with a fairly bad run of reffing across the league. Just saying.
2009 – DC, Edmonton – To be fair, this was during the Maciocia era but still the Esks’ D did finish dead last in passing yards allowed and 2nd last in points allowed. Which actually isn’t bad by Daley standards.
2010 –ST Coordinator, Saskatchewan. For the sake of my sanity and out of respect for my family who probably don’t want to hear the curse filled rant that would ensue, let’s not rehash how awful he was here. Though I did find a rare photo of the only useful thing Daley ever did for the Riders in 2010. 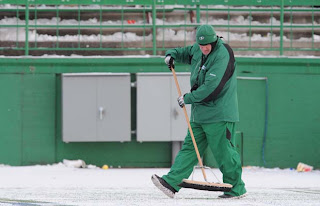 So there you have it. That is the resume that George Cortez would have looked at decided that this was the perfect guy for his Hamilton Ti-Cats. It blows my mind (even if you exclude the part where Cortez was in the NFL and might have been out of the loop) that this at any point seemed like a good idea. Oh well, as I said I’m happy that some other team did this to themselves. It will at least be enjoyable to watch the damage Daley inflicts on that group.
CFL Ins and Outs
BC
In: K Paul McCallum (contract extension)
Out: OL Jovan Olafioye (signed St Louis)
After trying out for half of the NFL, it is hardly a surprise to see Olafioye catch on down there. Word is he got a 2 year deal with 6 figures worth of guaranteed salary. The only downside for him is having to spend 2 years in St Louis as a Ram.
Edmonton
In: OL Simeon Rottier, DL Rashad Jeanty (free agent signing)
This one was almost as obvious as the ending to the movie Titanic. Rottier is from Edmonton, is currently building a new house in Edmonton, there were ongoing trade talks between Tillman and the Ti-Cats about acquiring him and just days ago Hamilton released him because he had no interest in signing a new deal in Hamilton.
Montreal
In: Jeff Reinbold (hired as DC)
Well this should be interesting. Somewhere Greg Marshall must be in disbelief.
Posted by Rider Prophet at 6:40 PM

Word I heard was that '97 GC was because Slack et al defied Daley and made up their own game plans.

Unexpected new plays become defendable by the third game so Toronto had no trouble beating them.

In fact, from where I was sitting Pinball Clemons looked like he let himself get caught running back kickoffs as a kind of act of mercy.

The Riders had also lost half of their defense by half time so the best the could do was limping along behind the TO receivers.

Actually My partnerBuy D3 Items and i looked at any Facebook video involving Demetrius Crawford in addition to trust your option. This individual visitors the DB's including he or she is some sort of linebacker. TheCheap Runescape Gold problem is their small dimension and may this individual always be hurt most of the time.