Riders vs. Eskimos: Let’s Get This Over With


I’ll preface today’s post by saying that I am still proud Rider fan, I still wear my jerseys out in public, I still intend on going to the remaining games and cheering my lungs out and I still plan on renewing my season tickets. So I’m not turning my back on the team I love… but even as a devout Rider fan let’s be frank here. The Riders suck this year. And barring a series of consecutives miracles coinciding with a ridiculous string of luck and some timely spontaneous deaths on opposing teams, they will not be making the playoffs for the first time since 2001. (Personally I was really hoping we could extend our streak to 11 years before breaking it if for no other season than we could release a remixed version of 11 Years, That’s Enough with a completely different meaning).
There’s no feeling quite like heading into a game that is your absolute last chance to make the playoffs and likely having to place your fate in the hands of Ryan Dinwiddie (the only thing worse is having to place your fate in the hands of Michael Bishop). Good things don’t happen when all hope is placed in Dinwiddie’s hands (unless your name is James Johnson). Our only hope is for Dinwiddie’s eyes to steal the soul of every defender the Esks have on the roster rendering them defenseless…

and even then at the rate the Riders are currently going there is still a chance we might not score or may find a way to score on ourselves. Sure having Fantuz back in the mix will improve things a bit but its kinda like pouring a sugar packet on a pile of manure… not like you will notice a difference in taste. I foresee a lot of this…. 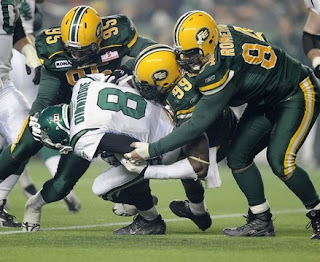 If you found my rosy summary of our offense depressing you probably don’t want to read what I have to say about our defense.  Even if we had a completely healthy roster it would not matter as the Ricky Ray precision passing game is the natural enemy of the Richie Hall defense. Expect a lot of crossing routes underneath that will completely baffle our coverage (they’ve been doing it for 5 years so their due to change this up this time around right?). As I said, we would have cause for concern even if we had a healthy roster… but we don’t. We are faced with the very real possibility of having to play JP and Eddie Russ at half due to injuries, as well as Sean Lucas defying the odds and starting yet again (shakes head in disgust). It won’t just be through the air where we struggle either… Jon Cornish at 205 lbs ran right over us… do you really think things will get better when its bigger, badder 245 lbs Messam running at us? Only thing working in our favour in that match-up is the chance that Messam will get himself ejected.
In light of how dismal our prospects are defensively, reports are Jim Hopson has formally requested that the league institute the Madre Hill Rule for this game. Seems like the gentlemanly thing to do.
As you have no doubt deduced, I do not expect us to win. I’ll still be yelling at the TV on Monday, hoping for a Thanksgiving miracle but the fact remains we completely stunk up the joint in 2 straight games of great importance… now that the window of opportunity is slimmer than the Dysart phone book, I really can’t see us suddenly playing at a high enough level win. This team mentally entered “next year territory” 2 weeks ago… this week they can officially enter it.
Esks by a lot.
I just hope I get to witness a patented Dinwiddie interception… that would make my liberty bird taste even sweeter on Monday.
Posted by Rider Prophet at 7:17 PM

If Ryan Dinwiddie wants to make his mark on this team ... then today is the day. Step up - or don't. Personally I'd like to see him score 40 points and kick Esk ass big time. Do I think that will happen .... (?) hmmm ... not likely. But ... bring on a quarterback controversy Ryan and beat the snot outta Edmonton ... or not.

To be fair Dinwiddie already made his mark on this team by making James Johnson a star.

You are a knowledgeable and perceptive Dude. You wrote the column before the game and was bang on. Your dream of a Dinwiddie interception came true. Actually 3 in the first half must have made your bird very tasty. In fact I would say the turkeys today were wearing green(and white).
So do they fire Miller,Hall and a few players now or wait until the off season. I am afraid if they don't the season ticket base will crumble. Makes me wonder if Doug Berry was so bad as a OC why after removing him have we no offence?

So this time Dinwiddie made Donovan Alexander a star. Dinwiddie has done more for mediocre defensive backs in the CFL than the Stonecutters did for Stave Guttenberg.

Govind ... I agree! I can't believe that we left Dinwiddie in for TWO whole quarters before we put Durant in to win the game for us. Oh wait ... that didn't happen either did it?

This 'hate-on' for Dinwiddie is ridiculous.

Anon - You gotta wait until the offseason for any major changes. Best we can hope for now is some increased playing time for the back-ups to see if they have what it takes.

Uncle Jim - Your right. Durant has been as bad, if not worse than Dinwiddie this season. No defending that.

But at least Durant has some past success to fall back on. Dinwiddie has never been, and continues to prove that he never will be, good enough to be a starting pro QB.

Use they will flames
Buy RS Gold Miller,Hall and many players right now or even wait until the off-season. We are worried if they do not the time of year ticket bottom may fall apart. Creates me personally ponder in case Doug Berries was so terrible to be a OC theGW2 Gold reason why right after extracting your ex have we no offence?

What you share is really nice. You just give me the exact guidance on related issue, and now i could understand that in my way. rs gold , runescape gold