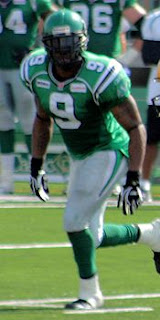 Today Reggie Hunt signed a one day contract with the Riders and formally announced his retirement (though at the rate this team is going it wouldn't have surprised me to see us play him this weekend).

The Reaper was a menacing presence in the Riders' front seven for 6 great seasons. Nobody thought we could replace George White but Hunt certainly did that carving out an outstanding career as a Rider culminating in a Grey Cup win in 2007.


All the best on a great career Reggie.
Posted by Rider Prophet at 5:52 PM

I always am and always have been PROUD of being a Rider fan .... but ... this makes me even a bit more proud than I already am. What a class act! All the best Reggie!!

I remember watching that game! What toughness. Classy move by Reggie and all invloved in letting him retire as a Rider! Good Luck Reggie!

Signing Reggie Hunt for 1 game was Tamen & Miller's best signing of the season. What a disaster the Riders are 3 Grey Cups in 100 years in an 8 or 9 team league, pathetic.

Bring out the clowns the circus is coming to town, I mean the Riders.

Get rid of Simpson, Romero, Cates, Dinwiddie, Tamen, retire already Miller your time has past.