The first metaphorical shot to the crotch was the news that Wayne Smith blew his achilles tendon while working out and will now miss the entire 2009 season. That’s right, the season doesn’t start for close to a month and we’re already looking at putting someone on the 9-game injured list. Well that’s certainly a positive omen heading into the season. Will achilles tendon be the new fibula? Smith was arguably one of our top O-linemen (when his back wasn’t hurt) so although we’ve got enough depth on the line to be okay, it’s still a big loss for the team.

I must say the circumstances surrounding the injury are somewhat suspicious. Smith was working out with Mike Abou-Mecherek. Now Abou was not offered a contract this offseason but was told to “stay in shape” in case there’s some midseason injuries. Now I won’t go as far as to allege he took matters into his own hands… but it does seem like a rather convenial turn of events in Abou’s favour.

Then of course the second metaphorical shot to the crotch came with the news that veteran LB (and the Rider Prophet’s favourite player) Kitwana Jones was traded to Edmonton. I saw the logic in the Perry/Jyles deal, I was one of the few who approved of the Kerry Joseph trade so it takes a lot for a trade to anger me… but this one definitely did.

Word is that Kitwana showed up 20 lbs lighter than last year and as such “no longer fit into our plans” (I’ll ignore for the moment that the idea of Jones playing DE is absurd and completely misguided). Apparently there is no room on our team for a talented LB and special teams monster. Admittedly, he’s not the most talented player out there but he’s plays with unbelievable intensity and it translates into sacks, forced fumbles and tackles.

But let’s pretend you buy into the logic that he was expendable… the least you could do is get something better in return than a 4th string QB that Edmonton managed to unearth while combing the NCAA powerhouse known as Div III. We have plenty of young QBs so I fail to see the logic in trading away a starter for a practice roster QB. The only redeeming thing here is that in Edmonton, Richie will continue to squander his talent at a position he’s not suited to play.

So goodbye Kitwana, you will be missed. 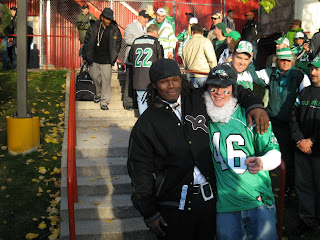 As for this Juan Joseph fellow we got in return, I just want to clear one thing up… So phonetically, is it pronounced John Joseph or Juan Woah-seph? What’s the deal?!

Last week the Riders finalized their coaching staff by hiring Mike Scheper as our new DL coach. So far, Tillman has done a great job with the coaching staff he assembles so I’ll give him the benefit of the doubt on this one. However, I’ll admit that on paper this move causes me some concern. Scheper is 29 years old, 185 lbs and played O-line in college. Scheper must have had one hell of a cover letter because his resume certainly wouldn’t jump off the page.

Calgary
In: Nik Lewis (contract extension), DB Dee McCann, DB Quinton Meaders, DB Davanzo Tate, DB Lakendrick Terrell, DL Mallick Jackson, DL Remond Willis, WR Vincent Marshall, WR Titus Ryan, WR Jermaine Jackson, WR Johnny Thomas (free agent signing)
Out: DL Montey Stevenson, DL Ryan Riddle (cut), LB Lenny Walls, DB Neil Ternovatsky (trade with Win)
It will be interesting to see if Marshall can stick with the Stamps. Let’s not forget that we cut Marshall a while back and the only reason he was even in the league last year was because of an outbreak of broken-fibulitis.

Winnipeg
In: DL Fred Perry (trade with Edm), OL Kelly Bates (trade with BC) LB Lenny Walls, DB Neil Ternovatsky (trade with Cal) WR Ivan Birungi, DB Darrius Battles, DB Patrick Body (free agent signing)
Out: Kelly Malveaux (trade with Edm)
So after completely trashing Brendan Taman’s recruiting methods, Mike Kelly has separated himself from his predecessor… by doing the exact same things as Taman: Acquiring other teams over the hill veterans (Perry, Bates) and trading away any and all draft picks (has already traded 6 picks). Given the historical success rate of these methods, it’s a shame Winnipeg is no longer in our division.

Montreal
In: Todd Kristoff (offered a tryout as long snapper), DL Nickolas Morin-Soucy (2009 Draft Pick signing)
Kristoff is a Rams/Thunder product who once played touch football alongside legendary players such as Rider Prophet and Media Consultant. All the best TK.

BC
In: WR Anthony Russo, WR Otis Amey, DB Mil’Von James, DB Trestin George (free agent signing)
Out: WR Eric McCain, Dereck Faulkner (cut), OL Kelly Bates (trade with Win)
I love how you can take a boring name like Melvin… alter the spelling a bit and add a random apostrophe and voila… a super cool name. I mean with a little creative liberty I could be the Ryd’a Prah’fit.

Toronto
In: QB Stephen Reaves, WR/KR Jerome Mathis, DB Devonte Edwards, LB John Keith (free agent signing)
Out: LB Matt Hewitt, LB David Lofton (cut)
The Argos are quite of proud of the fact that they signed a former Pro-bowler in Mathis. The problem is that the Pro Bowl selection came back in 2005 meaning that this is just a continuation of their misguided fascination with washed-up NFLers including Mike McMahon, Bethel Johnson, David Boston and Mike Vanderjerk. In his spare time, Mathis enjoys letting his pit bulls run free in the neighbourhood and assaulting his pregnant girlfriend. What a guy.
Posted by Rider Prophet at 2:09 PM