In my never ending quest to fill this blog with filler posts in absence of any real news, the Rider Prophet is launching a new regular feature on the blog. As you may have guessed by the title of this post the new segment will be called “The Rider Prophet Salutes Bad Team Names”.

For years the CFL was the laughingstock of the sporting world for having 2 teams named the Roughriders (to be fair the differences between a Roughrider and a Rough Rider are clearly vast but that’s a topic for another day). Well with this new segment I hope to show that comparatively speaking having 2 Roughriders isn’t all that bad. There are far more laughable things in the sporting world. Given the sheer volume of bad team names out there I will group them by themes.

This week I salute animal mascots…

4. Eerie Otters (OHL) – Until PB&J Otter form a gang and start roughing people up on the street I will contend that otters are not intimidating.

3. University of California Irvine Anteaters (NCAA) – The only team even remotely intimidated by UC Irvine is the mighty Fort Wayne Mad Ants of the NBA’s D-League.

2. University of Delaware Fighting Blue Hens (NCAA) – Now I can understand how a rooster could be classified as intimidating (hell they are so vicious that cock fighting has been made illegal), but a hen? What are they going do to lay an egg and then sit on them for weeks on end?

Winner: Columbia College Fighting Koala (NAIA) – Quick zoology lesson: Koala’s spend 20 hours a day sleeping and do nothing but eat eucalyptus the rest of the time, they don’t really have the time to fit fighting into that strenuous schedule. Besides on the off chance I’m wrong about the aggressiveness of the koala, I’m pretty sure I could take this “intimidating” creature. 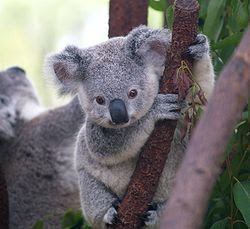 It would look something like 0:34 of this wonderful commercial

Dishonourable mentions: Texas Christian University Horned Frogs (NCAA), University of Oregon Ducks (NCAA) - The Ducks were actually penciled into the top 5 until Man in the Bush reminded me of that unfortunate time he was feeding bread to the ducks in the park and one of the ducks violated him and robbed him at gun point.
Posted by Rider Prophet at 9:18 AM

I don't know man, those otters in Planet Earth roughed up that crocodile pretty good.

And, it's good that you left Ducks off the list because Howard the Duck was pretty bad-ass. Also, he nailed Lea Thompson.

koala should be taken oof the list and this is why
1) have you seen gremlins they started off cute and cuddly then...

2)think of a koala like your girl friend sleeping for 20 hrs just to wake and eat then you make one wrong comment and she has just taken one of your pieces of manhood with a mellon baller. now i know what your thinking koala's dont have readly access to a mellon baller but get off my ass i was using it to make a piont.

3) steve irwin (for those who dont know who that is i think its time you start wearing a helmet at all times for safty. he's the crocodile hunter) called them timid but a sleeping danger and that man knew all(except not to piss with sting rays.

o ya and i told you anbout anton that pos

ps have you heard


bird is the word