It's Friday and let's be honest. I'm too lazy to compose full sentences and paragraphs and you are too lazy to read them. So my random, point form thoughts below really suit both our needs. Let's get to what's been happening.

- The biggest news of the week here in Saskatchewan was the re-signing of Duron Carter. He runs his mouth, he's good for at least one objectionable conduct call a game but damn is he talented and brings so much to our offensive attack! And for all his faults, off the field he has no issues and is great with the fans. All the top teams have at least 2 stud receivers (most more). So keeping him and Roosevelt is key if we hope to stay competitive in the West.

- It also means another year of TD celebrations (and now he's had all offseason to scheme). I'm hoping for a Flying V and the wresting fan in me would like to see a table incorporated. And as much as I think he needs to be a fulltime offensive players, I would be lying if I said that I had no interest in at least one more pick six on Calgary.  "Hey Bo, he's still your best receiver"

- The not so good news was OL Bruce Campbell getting suspended for failing a drug test. Honestly never thought I'd see the day where the CFL tested for drugs, let alone suspended for them. Campbell is a pending FA so he's future here is uncertain. I think we'd like him back but I think we'd prefer to find a way to start 3 Canadians on the line instead.

- The big CFL news was James Wilder announcing he's sitting out the 2018 season because he's making league minimum. I have no problem with the Argos standing firm. No one held a gun to Wilder's head when he agreed to sign a 2 year deal for that salary. Go figure that the terms of a mutually agreed to contract are enforceable. That said... I also have no problem with Wilder doing everything in his power to increase his earning potential. Contracts aren't guaranteed like other leagues so if a player wants to sit out to try and leverage a bigger salary or a release, Go for it. They are the ones who have to make the decision best for them and their family. Careers are short so make as much $ as you can here and now.

-   I honestly don't believe this is over. While I can see the Argos being reluctant to let him go to the NFL (which I get), I also think Jim Popp is smart enough to realize that the Argos are better off ponying up more money to get Wilder on the field rather than holding the line and not having him. After some initial posturing expect some negotiations to go on.

- This situation has once again raised the question of the bringing back the option year. I would be in favour of that. Some teams are already essentially giving option years by releasing players early (i.e. what we did with Bouka). So why not just make things standard across the board? 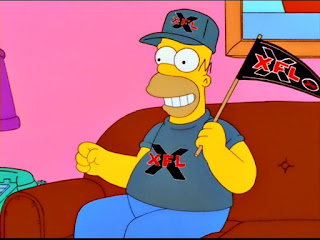 - After some initial hype I expect this to end like all other non-NFL pro leagues in the US. I just hope this short lived iteration gives us great memories like He Hate Me and the zany kickoff race that ended up separating a guy's should in week 1.

- I also think that Paul McCallum should come out of retirement and kick the first point just like he did in the original XFL.