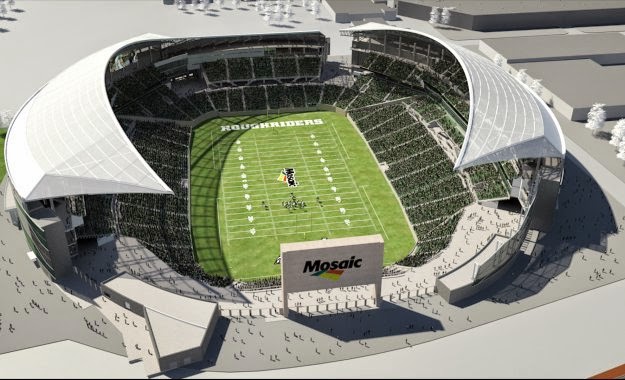 Last week we received a welcome break from the CFL labour conflicts with an announcement we have been waiting a long time for. Thursday we got our first look at what will be he Riders' new home: New Mosaic Stadium. As much as I applaud Mosaic's ongoing support of the Riders, it would have been a lot simpler if someone else had bought the naming rights so we wouldn't have to go through 3 years of this old Mosaic, new Mosaic stuff.

Quick side note on the naming rights. In 2006, Mosaic paid $3.75M for the naming rights for 10 years... any guesses on what the mark-up is for their 20 year extension? I'm guessing its somewhere between massive and Gene Makowsky's head size.

Personally I really like the look of the new stadium. What stands out for me the most though is that we clearly hired the right people to design and build this. Rather than try and go the discount route that Winnipeg did, we went out and hired the best stadium designers out there and that will pay dividends. An overhang that reflects noise back down, a stadium that is in the ground and positioned to minimize the effects of the wind (rather than the current stadium which was seemingly built to encourage it), a concourse that lets you still the field... you name it, they thought of it. It doesn't have personal sherpas to carry me to my seat but at least I won't have to climb as many ramps.

Some think the capacity is too low. I think they maybe could have gone with 1 or 2 more thousand but they were right in keeping capacity at a point where we can consistently sell out. It would be dumb to build a stadium so big that tickets become so easy to get and demand drops. Honestly my only concern was how low the expandable capacity for Grey Cup is. 40,000 seems really low. I would have though 45-50k would have been the minimum. But I guess if my biggest concern is about capacity for a game we host once a decade then they must be doing something right.

I really like how much lead time they have built into construction. The plan calls for the stadium to be operational by August 2016 which will allow for a couple test events that fall before the Riders move in in June 2017.  Now know that this is a construction project, there is no way it will be completed on time. But with a full 10 months of buffer time there are zero concerns that we will pull a Winnipeg (or to a lesser extent Hamilton). When the 2017 season opens, I will be comfortably seated in a brand new, kick ass stadium! I can't wait! This is a once in lifetime type of project and all signs so far point to it being a huge success.