Apologies for the delay in posting my weekly sentimonies. A ridiculously busy few days in the CFL happened to coincide with a busy time in the other areas of my life. I don’t like neglecting the blog and my readers but unlike those other areas, neglecting you won’t result in me getting fired, talking to social services or sleeping on the couch.

Even though I’m super late in doing so, I still want to give some thoughts on the biggest Rider story of the offseason… Weston Dressler signing with Kansas City.

We all knew it was a possibility but that didn’t make the news any easier to take. We love Weston and want to wish him all the best in a truly deserved shot in the NFL but we all feel the urge to grab onto his legs as he heads towards the airport terminal and beg him to stay in a tear-filled, blubbering, emotional outburst. He is one of the best to receivers to ever play for this franchise and I think we all just assumed he would play his entire career here.

From the moment I first saw him in rookie camp in ’08 he stood out. I won’t lie and say I knew he was destined for the Plaza at that moment but there was no doubt that midget was making the team. The only good thing to come out of the outbreak of broken fibulas that season was that is forced to Dressler into the spotlight far sooner than anticipated and thankfully made us realize how good he was right away. I will always remember his first TD against Hamilton. It was a toss from Durant and that’s when I think we all started to realize that Dressler was going to be more than just a returner/depth guy.

Another memory from the ‘08 season (most of which I have tried to drink out my brain to forget the pains Michael Bishop caused me) was his diving catch in the endzone in Winnipeg when Bishop just launched the ball and Dressler stretched out (all 3 feet of him) and hauled it.

And that’s pretty much the story of Dressler’s 6 year career. He just had this ridiculous ability to come up with ball. Be it one handed, diving, while be face-masked, in traffic, while bouncing off a defender like a Smart Car off a semi, you name it. He made the spectacular look routine and was the model of consistency and reliability. It was a treat to watch him play every week.

A few more Weston memories that are etched in my head:
- Everyone remembers that long TD that Getzlaf had in Calgary in ’09 to steal a victory, but I will always remember the massive return off a missed FG that Dressler delivered to set it up

- His forays into marketing: All Dressler, UnDresslers, Westermelons and the ever popular Teaser Pleaser.
- Dressler holding the Grey Cup… well I assume it was Dressler. I saw the Cup about chest level of a few other players and just assumed that Dressler was somewhere below holding it up as high as he could.

As for how he will do in the NFL I have no clue. He could be like Fantuz and be back by September or he could be like Chick and be gone for 3 years. Hard to say but he brings more to he table than Fantuz did (quicker, can play on special teams) so my gut says he will be there for more than a cup of coffee. Either way I see him returning here at some point. So until then I guess we can just wish him all the best.

As a side note, given that UND colours were also green, it’s going to be insanely weird to see Dressler in red and white.

At least he went out on top like he deserved: 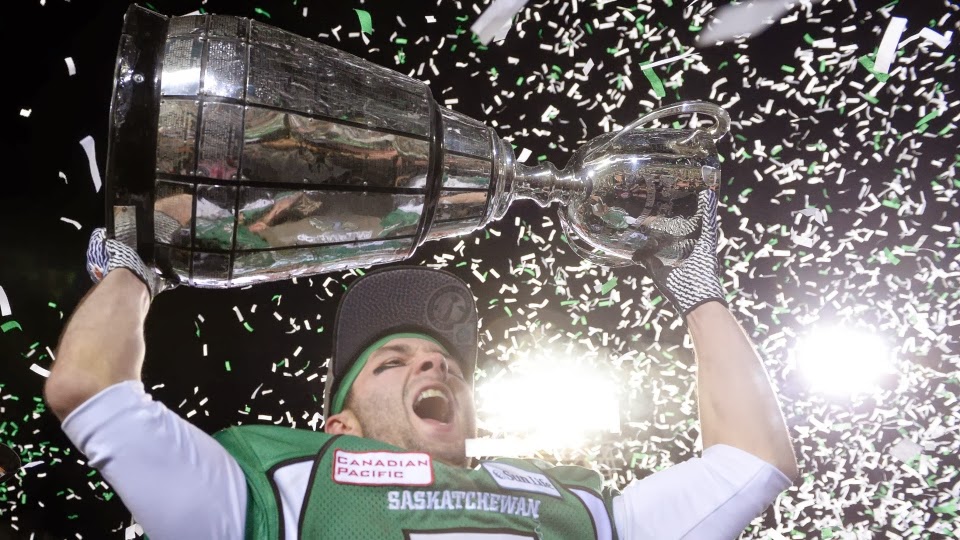 Posted by Rider Prophet at 5:30 PM