The oddest story coming out of camp this is week by far is the “retirement” of Dwayne Jarrett. I use the term retirement loosely because I’m pretty sure you actually have to do something before you can retire. Jarrett’s “retirement” from the CFL is about equivalent to me retiring from my career in biochemical engineering.

The irony of Jarrett’s time as Rider is that if the stories about him taking 6 planes to get here are to be believed, Jarrett likely spent more time in airports trying to get to Regina than he actually spent in the city itself. His career timeline is so compact it would fit in a fortune cookie:

May 11 – Signs with Riders
Jun 2 – Arrives in Regina (after missing all of rookie camp)
Jun 3 – Participates in his only day of practice. Injures his foot at some point
Jun 7 – Retires

His stay with the Riders was so brief it makes Joe McGrath look not so bad by comparison. In the end Dwayne Jarrett will have about as much an impact on this team as Double J Jeff Jarrett.

One thing to keep in mind though, because Jarrett retired as opposed to being cut, we retain his rights for the duration of his 2 year contract. Although the odds may seem slim at this point, this does leave the window open for a future return. Also, I’m still not entirely convinced that this just isn’t a way to free up a training camp spot until Jarrett is healthy. Plenty of players have “retired” their way through training camp… Bob Cameron made a career out of it.

Its tradition on the blog to salute prominent members of the Riders who retire and with that in mind I present my Top 5 Dwayne Jarrett Memories:

5 – Jarrett Signs/Prophet Makes DUI Joke
Any time someone makes my job easier I really appreciate it.

4 – Six Planes To Get Here
I know Regina isn’t exactly a bustling metropolis but unless you are starting from a remote village in Ethiopia you should be able to get here in less than six flights. Next time I recommend Mr. Jarrett look into a travel agent. Then again maybe he just really likes accumulating frequent flyer miles.

2 – Making An Impression On The Coach
After all the wait and hype, Jarrett finally took to the field for what would turn out to be his only practice. Fans (many of whom had already penciled him in as a starter/perennial all-star) were eagerly awaiting what would no doubt be a display of pure awesomeness from the former NFL second rounder. Unfortunately reality fell slightly short of expectations. This was reinforced after practiced when the media asked coach Chamblain about Jarrett’s performance. The response… “I never really noticed him “

It would turn out to be the nicest thing anyone said about Jarrett.

1 – Lasting Memory
When I think of Jarrett as a Rider this will be the image that is forever in mind. 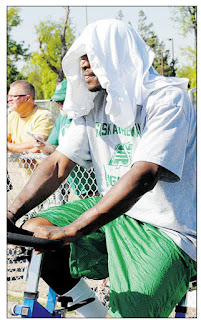 *** I was actually going to make tribute video to Jarrett on Youtube but it pretty much would have just been this picture and a bunch star wipes. If you just look at this picture while playing Sara McLachlan’s I Will Remember You in the background, you can get pretty much the same effect.***
Posted by Rider Prophet at 8:02 PM

One great thingDiablo III items is the fact even when this bank account is nearly fully zero he / she looks calm and it's till producing his / her reads/throws. Believe we can easily fare best when compared with him although he is a safeBuy Guild Wars 2 Gold and secure choice in a desperate,