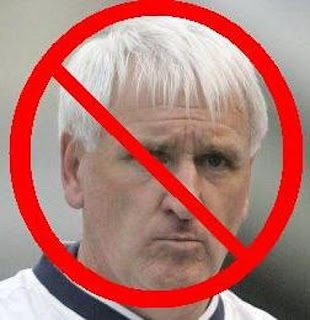 There has been rampant speculation regarding the future of Daley since the season ended. There was probably also a lot of praying, hoping, wishing and bartering with God, the devil, Jebus, the Easter Bunny, Jiminy Cricket and pretty much anyone else we thought could help us on the matter. But we can all rest easy as it has now been officially confirmed that Jim Daley will not be returning in 2011.
Sing with me people!!!


This mercifully brings to an end one of the most embarrassing tenures by a coach in Rider history… and that history isn’t exactly overflowing with success stories.
While the general feeling across Riderville is absolute jubilation, there are those who for some reason (likely mental illness) do not agree with the move (thankfully they are in the minority). I have heard some pretty ridiculous statements, so allow me to address some of these with the latest instalment of Everyone is Stupid but Me (aka Addressing Uninformed Opinions)
Uninformed Opinion #1: The fans forced the team into this move
False: At least I sincerely hope it’s false. The team is making this move because Jim Daley was absolutely brutal at his job. Name me one redeeming thing about our special teams form 2010 that doesn’t involve Eddie Johnson… go on I’ll wait… that’s what I thought.  I give our management enough credit that they are making this move for more than just to appease the fans.
Uninformed Opinion #2: It’s not Jim Daley’s fault. At some point the players need to be accountable.
False: When there is the odd screw-up here and there (as there will undoubtedly be) it is indeed the players’ responsibility. But when there is a repeated pattern of absolute ineptness over an entire season, the man responsible for that facet of the game must take the blame.
Uninformed Opinion #3: Jim Daley tried his hardest.
Technically this one is true… and therein lies the problem. Daley did try his hardest and that was the best he could muster. Bottom line is that no matter how hard he tries he is just a bad coach and this past season is just the latest entry on a resume littered with failure.
I have never developed such low expectations of one phase of our game as I did with our special teams in 2010. It got so bad that I held my breath nervously anytime we lined up for a kick or to receive one. You just never knew what was going to happen but you were pretty sure it wasn’t going to be good…kinda like Man in the Bush’s love life. Actually when you consider the number of times that it resulted in the mishandling of balls…. Umm, never mind.
The season started with the opening kickoff of our season opener being kicked out of bounds, incurring a penalty.  That ended up being a very prophetic start to our season because what followed was a string of gaffes that if bundles together into a highlight package with that circus music playing in the background, would probably get rave reviews on the Comedy Network.
Thankfully we can officially close that sad chapter of Rider history.  Unfortunately I don’t hold out much higher expectations for the Steve Buratto chapter. Oh well, if he can at least muster a returner who catches the ball as opposed to letting it bounce off his face, he’ll be miles ahead of Daley.
Posted by Rider Prophet at 5:43 PM