It’s time for our yearly ceremony to honour the best and worst of this past CFL season. There will be no actual award show as per usual because, despite discussions with TSN, they informed me that they would be unable to spare any airtime as they had to ensure enough was available to simultaneously show replays of past games on 4 channels.

This year’s winners will receive an autographed picture of the Rider Prophet, a Pot of Gold box with that one chocolate left that no one wants to eat and tickets to an Oilers game (given their dreadful play and falling attendance, the team has concluded that giving me tickets to give away is the last resort before paying people to attend the game).

Best Player Name
Generally winners of this award fall into one of 2 categories: hilarious or difficult to pronounce. This year’s winner is the latter... Lirim Hajrullahu. Try saying that 5 times fast.

Play of the Year
Normally this award goes to a play that is comical or embarrassing. This year though, I am changing it up and going with a play that caught everyone's attention in the Grey Cup. This hit was awesome!! unless you happened to be named Maver.

Botched Call of the Year
Oct 24 in a game between Ottawa and Montreal… Brandon London fumbled and Jovon Johnson recovered. The ruling was a fumble which the Als challenged. Command Centre overturned the call on the field and said no fumble… which prompted Rick Campbell to challenge (a Doug Berry-style: I challenge your challenge).

The CFL later admitted they got it wrong (and given how little that happens it tells you how bad they botched it). I have grown used to the officials botching calls. But when the wrong call is made despite using video review that takes it to a whole new level.

Honourable mention to every time Dressler had a big punt return.
The Commercial I Didn’t Get Sick Of Seeing Even Though TSN Made Me Watch It 54,297 Times Award
It was a terrible year for ads. I blame the lack of a new Flex Seal ad to tell me what else can be made into a boat. The best of the bunch goes to Old Spice... briefcase taco.

Fans Choice Douche-Bag of the Year
Before we get to this year's winner, I would like to make special note of two time defending douche-bag Jon Cornish who finished tied for second in voting... despite not even being on the ballot. A true testament to just how big a douche bag you think he is. Rest assured this strong write in vote will ensure that Cornish is back on the ballot next year regardless of whether he does anything douchy.

Now to the winner...
You the fans have spoken and with 53% of the vote have name Chris Jones as your Fans' Choice Douche-Bag of the Year. 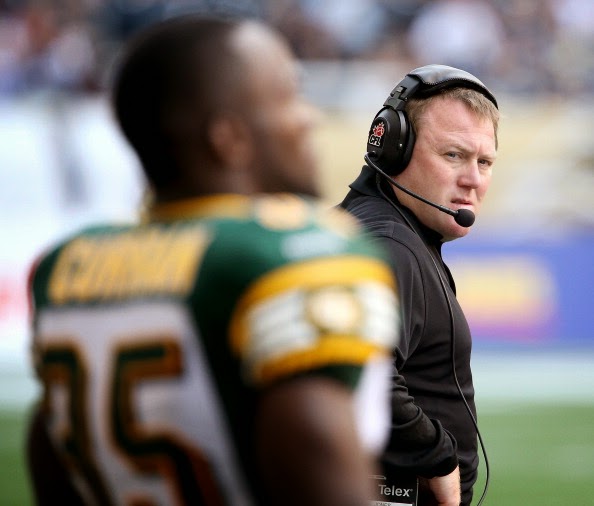 Now Jones has had a strong reputation for being an asshole for many years, but I think it was the whole snubbing of the national anthem that upgraded him from common asshole to award winning Douche-Bag.

Most Insulted Sports Figure
So many potential winners this year. There was the uselessness of Chaz Schillens, the idiocy of Eron Riley, the offensive play calling as a whole, the general Getzlaf-ness of Getzlaf, Dan Clark’s efforts to ensure all our QBs ended up in the infirmary, another miss for Milo, and I could go on. But this year I will change things up a bit and award this to a group of people instead of an individual.

By a wide margin, the majority of my insults were directed at any Rider QB not named Durant. The combination of Sunseri/Doege/Joseph will be a leading reason I get called into the principal’s office someday to address Prophet Jr’s swearing. They made the Michael Bishop era seem not that bad by comparison.
Previous winners: Pat Neufeld, Chris Getzlaf, Ryan Dinwiddie, Jim Daley, Michael Bishop x 2, Marcel Bellefeuille

Glad you stayed away from the Wendy's commercials