Tomorrow Anthony Calvillo will be holding a press conference where it is almost a certainty that he will officially put an end to one of the greatest careers in football history. I was kinda hoping he would hang in there for one more season purely because he would become the first guy to play against three different versions of a franchise (Rough Riders, Renegades and REDBLACKS). No way that ever happens again. But given his age and the severity of his last injury, it’s no surprise to see him call it a career now. I mean he has honestly accomplished all there is to accomplish (short of throwing a TD pass to himself). The only regret he will have about his career is that he didn’t get to end it on his terms and the final play of his storied career will be having his brains scrambled on the Mosaic turf. He deserved a better send off.

In the coming days and months there will be a plethora of articles detailing his the awards, records and championship that Calvillo amassed over the past 3 decades and honouring his greatness. I won’t even attempt to tread into that realm. I’ll leave that to the actual journalists. Besides you didn’t come here for real journalism. So I will now honour Calvillo’s storied career with a bunch of random and meandering thoughts.

Cavillo started his career so long ago that:
-       He knew a world of two Rough Riders
-   He knew a world before McGill Stadium
-       Ottawa had yet to fold even once
-       He knew a CFL where legitimately the best team was called the CFLers
-       It was still called Skydome and Taylor Field respectively.
-       Paul McCallum had just received his pin for 25 years of CFL service during Calvillo’s rookie campaign
-       The Riders were a gong show organization and the Eskimos were the gold standard

-       The only thing Calvillo never saw in his storied career was the Bombers win the Grey Cup
-       He must have really loved football to not walk away from the CFL in disgust after his Las Vegas Posse experience
-       For a Mexican so be so beloved in a place that be so pro-french it defies logic at times is pretty telling as to Calvillo’s greatness
-       Calvillo’s career is unbelievable even before you factor in the medical issues he and his wife have persevered through
-       Despite his greatness, Calvillo seems to be genuinely nice and universally liked. Only guy I can think of to not like Calvillo is Brett Favre.
-       While his career has had many highlights, this comedic attempt at a drop kick was definitely a low light (still hilarious) 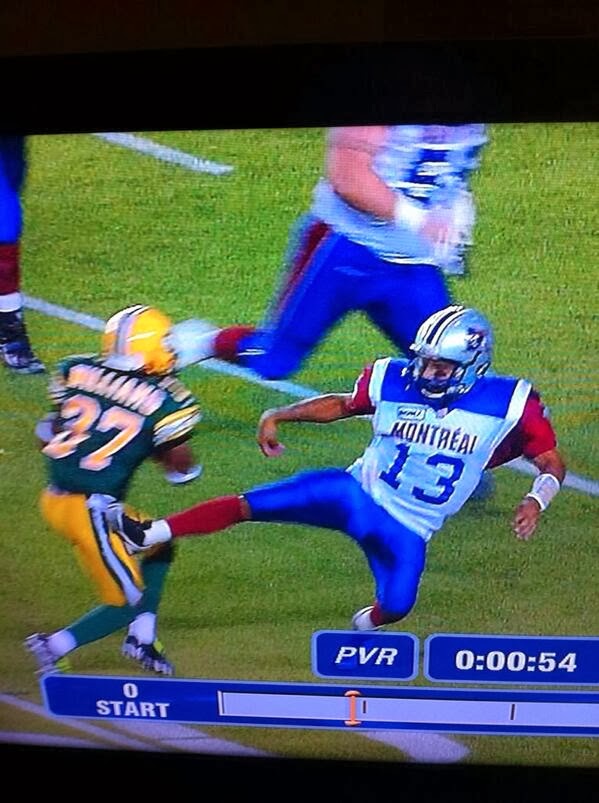 So let me simply end by saying that it has been a privilege to watch Calvillo play over the past years (minus the Grey Cup in ’09 and ’10) and I consider him to be one of the best to ever play.
Posted by Rider Prophet at 6:00 AM