Well nothing much happened over the weekend so I will once again be reduced to Random Quasi Coherent Thoughts after only a one post hiatus.

Let’s see what’s in the news…

· After 8 seasons as a defensive coach for the Riders, Ron Estay is retiring. Swamp Dog will be returning home to Louisiana to be a hunting and fishing guide. After enduring many health problems this past season, Estay’s cancer is in remission and he seems to be in good enough health to enjoy his retirement. Estay is a truly inspiring individual whose presence will be missed. We wish him all the best. Word is the Riders will replace Estay with a coach with the same intensity and incomprehensible southern accent… 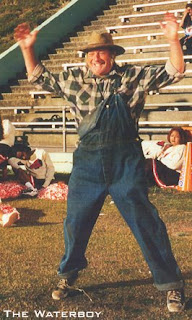 · We should hopefully have an announcement this week regarding the Rider coaching vacancies. It’s expected that Gary Etcheverry will be named D-Coordinator with Dave Ritchie and Kavis Reed being named assistants. Knowing my luck the announcement will come within hours of me making this post... and will completely contradict what I just wrote.

· The Toronto Argonauts are continuing their quest to eradicate unemployment among former NFL Europe coaches. Having already hired Bart Andrus (Amsterdam Admirals) and Peter Kuharchek (Rhein Fire), they added Ron Keller (no relation to Helen) as their O-line coach who used to coach for Amsterdam as well. In keeping with their recruitment strategy, Keller has no CFL experience. The only real upside to an entire coaching staff with no CFL experience is that, given their collective unfamiliarity with the 12 man game, the odds of taking a “too many men” penalty has gotta be close to 0.

· A while back I told you that Sandro DeAngeles’ attempts to catch on with an NFL team had netted him 0 interested calls. Well teammate Burke Dales is following in Sandro’s footsteps, as he too is trying to garner NFL interest but is also not getting any calls. Based on how well their NFL attempts are going, I can picture these 2 at a bar hitting on all the hot ladies and wondering why none of them are wooed by their kicking prowess.

· I made the mistake of tuning in to the NHL Skills Competition on Saturday. Honestly the only people who seemed less interested in the competition than me were the players themselves.

· Was I the only one who thought Evgeni Malkin did not go 4 for 4 in the Accuracy Challenge? Communist conspiracy anybody?

As you can tell by the fact that I’ve been reduced to commenting on the NHL, I am quickly running out of material. Hopefully something noteworthy happens over the next few days or I may be reduced to commenting on the Australian Open (though if Bosnian and Serbian fans keep fighting after matches it may prove to be a more interesting topic than anything I’ve got).
Posted by Rider Prophet at 3:01 PM

Honestly, if you want something done, just have the Rider Prophet speculate on it in his blog and within hours it will happen.

Can you do something about the face-melting cold? Every time I step outside I feel like I've just opened the Ark of the Covenant.

Okay, knowing my luck though, I will have to guarantee that Mo Lloyd with sign with another team and state that there is a 0% chance of the cold snap ending before June. Given past history those 2 statements should be enough to ensure that just the opposite will occur.

I will do what I can though.