As promised here are some pictures from this weekend's game in Calgary.

Pre-gaming at the Keg which was also overrun by Rider Fans. Note the confused look on the face of one of the few Stamps fan brave enough to join us. 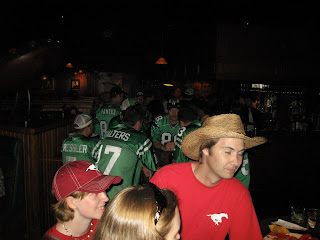 Kumar enjoys a burger after his recent escape from Guantanamo Bay… No word yet as to the status of Harold. 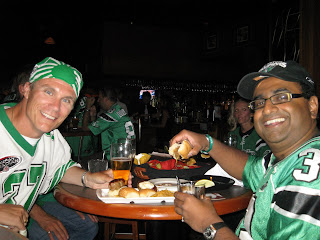 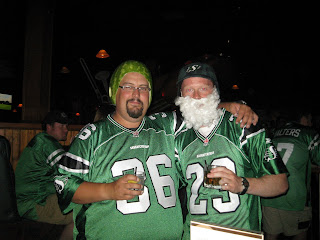 The Rider Prophet and CRF 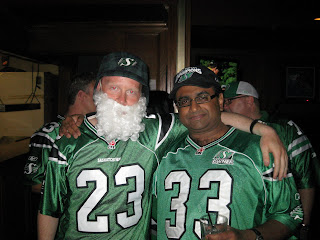 On to McMahon where the endzones were a sea of green 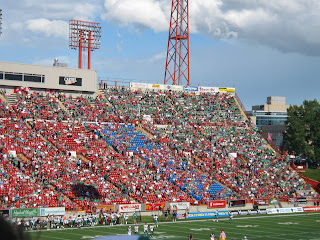 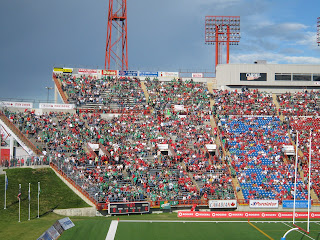 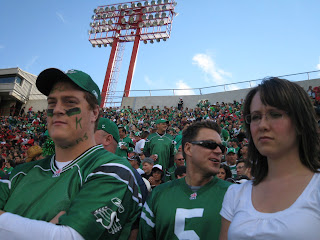 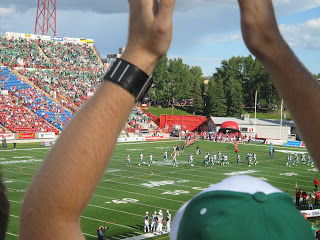 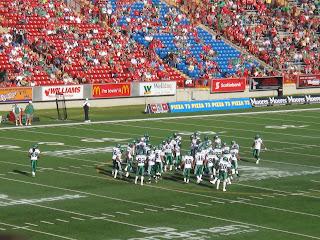 The stands midway through the 1st Quarter. Seems many Stamps fans came dressed as empty seats. 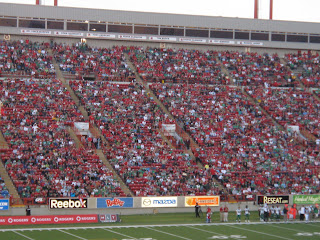 The stands when the clock hit 0. Note that the Stamps fans are still doing their best impression of empty seats 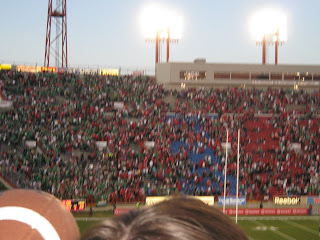 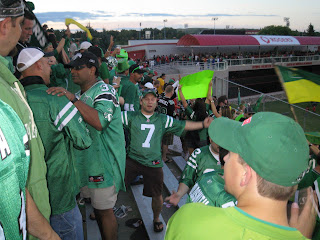 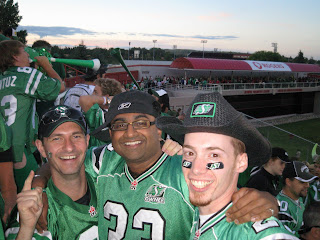 The Rider Prophet politely responds to the jeers of Stamp fans.... 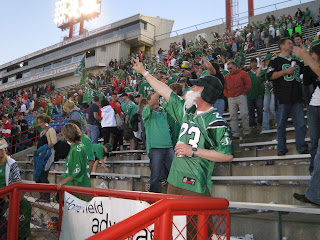 ... By pointing out the scoreboard! 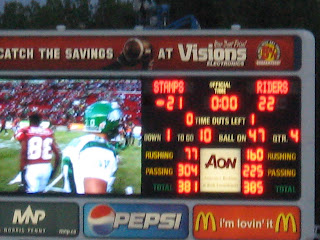 Rider Prophet with Marcus Crandell after the game. By the way, Crandell is still undefeated as a starting QB this season… just saying is all. 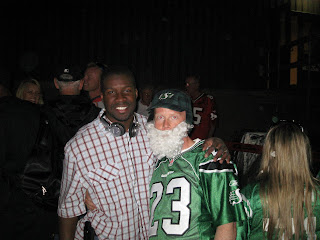 And thus concludes my photo journal. Check back later for my thoughts on the upcoming rematch.

In a way these pictures are very scary. What would happen to this league without Rider fans?

A co-worker (from Calgary once told me that 'no one cares about the CFL anymore except Saskatchewan people'. Another person (Total-CFL website)several years ago told me that Argos games average about 22,000 people per game even when the Riders are in town; but for the Riders the sea of blue becomes a sea of green.

Is the rest of this country too sucked in by the 'America is better' thinking or are we so far behind the more sophisticated rest of the country.

When you TRULY appreciate football for talent, guts, heart and desire, you appreciate the CFL; otherwise, you caught up in the hoopla of the N[o] F[un] L[eague]. It's a lot like American Idol: they aren't really stars, they're just a product of hype.

As one TV commercial used to say: "You have to live here to get it".

Permit me a slight modification: "You have to live here, or been born in Saskatchewan, to get it".

ON Rider Prider
Kitchener, ON

My question was, could this league survive if Rider fans stopped attending and watching games? Are we the last holdouts? There is no question we're nuts as far as the outsiders are concerned..But I suspect we're the last fans of a dying league.

Personally, I've never been able to stomach an entire NFL game perhaps because I have no money riding on the outcome.

My daughter and her family live in Kitchener and she tells me she's never met another CFL fan there except the odd Rider fan.

Other cities place greater empahsis on their NHL teams, or MLB teams (which is odd since most of them are terrible) and so CFL takes a back seat. Here though, nothing is placed above the Riders (mainly because there is nothing else in this province).

It won't be long before gamedays are declared provincial holidays.

Certainly. And I have faced it.