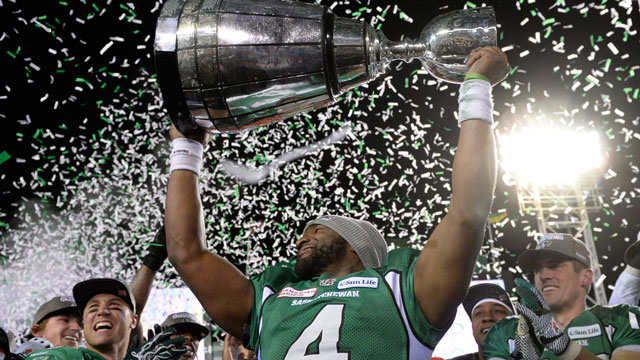 It’s fair to say the last few years haven’t quite gone to plan with a combination of play-off failures and failure to even make the play-offs giving us Roughriders supporters a rough ride of things. We’re not here for moping around though so we’re going to look on the brighter side of life by taking a walk down memory lane as we look back on the four Grey Cup successes we’ve had over the years.

The 1989 season looked like being bang average for so long that the fact it now ranks amongst the best in Roughriders history is almost hard to believe. Throughout the regular season the most consistent run of form the team showed was a streak of four losses. With regards to recording victories the most they mustered back to back was two giving them an overall record of 9-9.

Thankfully, that form improved in the post season as the Roughriders bounced back from a final day 49-17 thrashing at the hands of the Edmonton Eskimos to put three wins together ironically with the West Final coming in the form of a 32-21 victory over the Eskimos. The Grey Cup match got off to a sticky start with the Hamilton Tiger-Cats easing into a first quarter lead, but Kent Austin and Dave Ridgeway starred to bring home the second Grey Cup in Roughriders history with a narrow win.

The 2007 campaign was all about Kerry Joseph as he was named Most Outstanding Player. Rightly so too with a contribution of over 4,000 passing yards and 24 touchdowns. Of course, there was a team game to be considered too and it just so happened the Roughriders turned in one of their best years for a couple of decades as they ended the regular season with just six defeats to their name. It meant they finished second behind the BC Lions.

A standout moment came in game week five. The Roughriders welcomes Edmonton to Taylor Field and turned them over a whopping 54-14 making it their sixth best offensive points return in history (it’s now ninth in that list). It was also the start of a five-game winning run.

Come the post season, a West final against the Lions had the odds stacked against the Saskatchewan side but what transpired was four quarters where the Lions failed to dominate any. In the Grey Cup match, the Roughriders ended their drought with a hard earned 23-19 win over the Winnipeg Blue Bombers who to this day blame their defeat on the absence of quarterback Kevin Glenn. We don’t care one bit.

The 2013 offseason was a busy one with a host of staff changes; most notably the arrival of former Hamilton Tiger-Cats coach George Cortez, who had been part of the Roughriders staff years earlier. Any question marks over the new setup were soon put to bed as the Roughriders lost just one of their opening nine fixtures with a shutout win over the Tiger-Cats a display of the team’s defensive capability alongside what was a relentless offence. A mid-season wobble did knock fan confidence though as the team suffered four defeats on the bounce to lose their grip on top spot in the division.

Three wins from the last five saw the Roughriders through to the post season though but after overcoming the BC Lions 29-25 a faceoff with the Calgary Stampeders didn’t leave the support with much expectation after they’d emerged victorious twice in the regular season. Not this time though with Darian Durant the man of the moment with three touchdown passes to his name in a 35-13 win. The big match pitted the Roughriders against Cortez’s former side in Saskatchewan. The Tiger-Cats were made to look like fluffy kittens in a comfortable 45-23 win.

The 1966 team picks itself as the greatest of all time with relative ease in our minds. Yes, the team wasn’t flawless as the Roughriders gave away a fair few points throughout the season but the offence, which included All-Stars George Reed and Hugh Campbell, was a force to be reckoned with.

Seven wins from the first nine matches gave Eagle Keys’ men a tremendous start but the form became inconsistent in the second half of the season as they only won two of their last seven with one tied. Even so, the Roughriders had done enough to scoop the regular season win.

What came next was a two-game showdown with the Blue Bombers to decide who would be crowned Western champions and head into the Grey Cup season finale. The Roughriders prevailed 2-0 with a 24-7 and 21-19 triumph.

It all boiled down to one match, the Roughriders showdown. Could the team from Saskatchewan defeat the Ottawa based team of the same name? Damn right they could. A blistering first quarter saw a 14-6 lead established and although a 0-8 second restored parity before a scoreless third, victory was never in doubt. The final quarter came, and Ottawa were sent packing 15-0. It brought the final score to 29-14 meaning the first - and only - clean sweep in Roughriders history was secured.

There you have it, four Grey Cup wins. Here’s to many more moments like those. And if you enjoy football check out the latest odds from the NFL here: https://extra.betamerica.com/nfl/odds/

Posted by Rider Prophet at 7:40 PM

I read that Post and got it fine and informative.

your article so amazing and informative. Your writing skill is also very well. Your article is really addictive. Keep posting. keep sharing the knowledge. I love to read your articles.
english stories english short stories with moral value What is the factorial of 100