It’s the most anticipated game on the regular season schedule. Even in bad years (not like we’ve had any of those in past few decades) a game with a boisterous sellout crowd. A time when an influx of visitors from the East (i.e. the only place in Canada where tooth to gum ratios hover around 1:1 and IQ levels count be counted on people’s hands) come to witness their team get pummeled in person. I’m talking of course about the Labour Day Classic!

Buckle in because this is going to be a long post. I of course must devote the first section to educating you on some facts about Manitoba. You know, so we can be more knowledgeable and gracious hosts to our visitors this weekend. Then I will get into my usual game preview. Now I pride myself on being an inclusive and non-judgmental person (stop laughing) so I decided that rather than writing out Manitoba facts as a I normally do, I would be mindful of the dreadfully low reading levels in Manitoba (and if I’m being honest pockets of Saskatchewan) and represent the facts graphically instead. Ooooh pretty pictures! 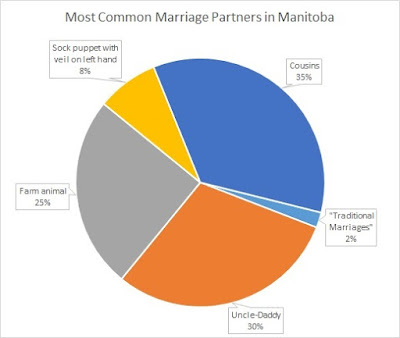 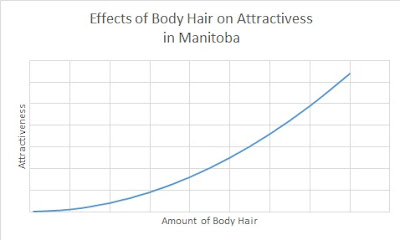 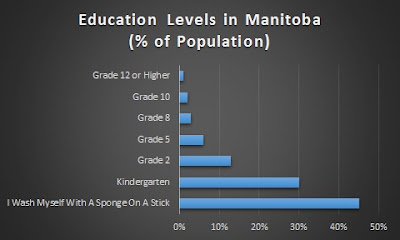 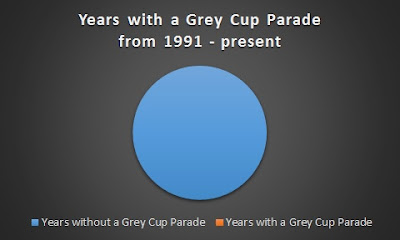 Alright with that out of the way, let’s get to the game.

With the exception of that unfortunate incident in 2016 (which we shall never speak of again), the Riders haven’t lost Labour Day in over a decade. Some of those games have been exciting. Some have featured such awe inducing QBs as Justin Goltz, Brett Smith and Michael Bishop. This one should be more of the former. We are riding a winning record and a 2 game win streak in the West. While the Bombers come in on a 2 game slide, they are still a talented team.

This will be a big test for our much beloved defense. The Bombers have the #1 scoring offense in the League and LaPolice’s playbook has more wrinkles than a naked senior citizen (how’s that for a disturbing mental image). They have one of the best O-lines and the #1 rushing attack powered by Andrew Harris. That said, they do have their shortcomings that we will need to exploit. First is Matt Nichols. I don’t know if he’s regressed or if the pre-season injury is still affecting him but the gunslinger that broke out last season is nowhere to be found this year. The Bombers are 6th in passing yards and have the second fewest completions of 30+ yards. Also they can’t seem to protect the ball with 21 giveaways (3rd most). Last season Nichols threw just 8 INTs over the whole season. This year? 7 already in just 7 games. It’s no secret that this offense revolves around Andrew Harris and that works when your QB can be counted on to keep the defense honest but lately that seems to be a struggle. Here’s some super obvious analysis for you: priority 1 is shutting down Harris.  Winnipeg has only won once when Harris fails to crack 100 yds and only lost once when he does crack 100. They are also 1-4 when Harris gets less than 18 touches. That means strong run D and tight coverage when Harris leaks out for a pass. You can bet LaPo will be throwing some wild stuff at us: Streveler passes on short yardage, reverses, WR throws. Secondary will need to stay disciplined. We likely won’t have the benefit of WRs dropping everything like we had in BC. With Winnipeg’s struggles to stretch the field we need to focus on taking away the short stuff. That O-line poses one of the biggest challenges our D-line will face but we hung 5 sacks on Calgary so I’d say they are up for the challenge. I’m setting the turnover line at 2.5 and taking the over.

The Winnipeg defense is a talent-laden group that is drastically underperforming. On the positive side they are among the league leaders in takeaways and sacks. On the negative side they are 6th in points and total yards allowed and 7th in passing yards allowed (something Bomber fans are ready to run Richie Hall out of town for. His famous bend but don’t break D has become a bend and then break defense). So it would seem the recipe for success is just don’t turn the ball over. Easier said than done of course. It goes without saying (even though I’m saying it, thus defeating the purpose of this preface) that we need to run the ball to slow down the aggressive pass rush. Hopefully having Thigpen back will add some needed speed to complement Mason’s power. In the pass game we need to establish some medium passes. Of late we seem to only have the quick screen or chuck it deep and pray in our toolbox (to be fair this is a positive step us we previously didn’t have the 2nd one in the playbook). Winnipeg has the most INTs so unless we balance our passing attack, the deep shots could start proving fatal. It would be a nice time for a big game by Roosevelt who could be that reliable underneath presence we need to string long drives together. That will require Williams-Lambert and Evans making some plays to draw coverage away from him. I would also be in favour of using Kyran Moore’s speed a bit more. Both him and Thigpen could be deadly weapons in this game.

You can bet with an O’Shea team that special teams will play into this. We obviously have a returner with the ability to flip the field. While not nearly as consistent, Kevin Fogg also has that ability. I also fully expect a punt fake from O’Shea or a reversal or some trick on a return (I’m having flashbacks to the punt return TD in the last Banjo Bowl, shudder). Need some solid play on teams to ensure this is a phase we win.

The magic number in this game is 30. Not as in the almost 30 years its been since the Bombers won a Grey Cup. Seriously the last time the Bombers won the Cup MC Hammer and Vanilla Ice were the coolest thing in music, Kindergarten Cop was one of the top films (it’s not a tumor!) and people still though Bill Cosby was delightfully hilarious. No, by 30 I mean points on the board. Here’s your super interesting but probably useless tidbit of knowledge for the day. In games where the Bombers score 30 points they are 4-1, when they score under 30 they are 1-4. In games their opponents score 30 points they are 0-4, when they hold opponent under 30 they are 5-1. Now I won’t lie and say I’m banking on our offense to crack 30 but we have only allowed 30 points twice this season and just once at home.

A quick start will be key. Score early, crank up the crowd noise and the pressure on Nichols and make them play chase. As much as I love dramatic game changing plays on Labour Day, I would be all for a super boring game where we grind out a victory. Unfortunately, I don’t see that happening. I expect some fireworks on both sides in this one. I see this as a game that will take a few years off my life expectancy. In the end though, I expect the Riders to win the Labour Day Classic. It’s what we do.

Riders by a Roosevelt TD
Posted by Rider Prophet at 6:30 AM

Can't disagree. Are Brooks & Butler healthy scratches or are they hurt?

Anon - Brooks is hurt but it doesn't sound long term. Butler may be nicked up but I'm not sure if its injury or just resting our old DBs that is keeping him off the field