The news hit Friday morning like an earthquake across the prairies. Months of speculation was finally put to rest as the Darian Durant era ended in Riderville. While the rightness or wrongness of the move will be debated endlessly, today's post will not focus on the trade but rather honouring the man leaving town. In a rare change of pace, this will be a relatively serious post devoid of most of the normal smart assery and humour that fills this space .

Over the years I have grown fond of many players but have developed a strong emotional attachment to very few. Durant was one of those few. It took a couple years to find out what we had in this unassuming 3rd string QB from North Carolina but once we did he went on a meteoric rise to stardom. I won't lie and say I knew from day 1 that he was special. In fact, I distinctly remember after that first game in '08 the nicest thing I had to say was that he managed to do just enough for us not to lose. But he quickly won me over during the hot streak that ended with a blatant dirty hit to his ribs... which sadly paved the way for the Michael Bishop era (a fact that I'm still mildly bitter about). Though he ended that season in less than superstar fashion, I was sold. We had our QB.

In 2009, he vindicated my view by leading us to the Grey Cup. While the end is something no self respecting Rider fan ever wants to discuss, Durant played like a champion and cemented his status as one of the League's top QBs. He followed up in 2010 and one his best statistical regular seasons  (highest passing and rushing totals of his career). He also led the team back to the Grey Cup looking to right the wrongs of the previous year. Unfortunately, the season had taken its toll on his body and he was a shell of his normal self in that game. He gritted it out pretty good but he was not near healthy enough to carry the team.

Then came some tough times. 2011 was brutal and while it wasn't all Durant's faults (I mean this was the short-lived era of the coach who said it wasn't his job to motivate the players) his play slipped. Critics began to muse aloud if Durant would be able to make the transition from young hot shot running QB to poised passer. It was a transition that many failed to make (such as Nealon Greene... though the presence of tangible talent separated Durant from Greene but I digress). 2012 brought a new coach and a chance for Durant to show he'd made that next step in his development. It was an up and down year and certainly Durant was not the model of consistency but though they lost the game, in the west semi that year I saw a Durant that  had clearly taken that next step.

Durant was always a guy who like to prove people wrong but he entered 2013 with a chip on his shoulder the likes of which I'd never seen. He was focused and driven by only one goal. Under the guidance of George Cortez he posted career highs in TD passes and QB Rating. That year also brought one of my favourite off-field memories of Durant. He called someone on social media a "dumb f*%$" (the guy deserved it).

If you ever want to watch a QB play at the absolute highest level possible, go back and watch the 2013 playoff run Durant had. He was on a whole other level and took the team on his shoulders and took them all the way to the single greatest moment in Rider history. He had finally cemented his rightful place among the champions. 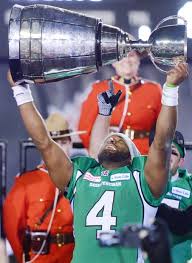 I was convinced that Durant would be the first Rider QB to win 2 Grey Cups. And the way 2014 started it looked like he would not have to wait long. A freak injury derailed that dream and set in motion a chain of unfortunate events that ultimately led to his departure. The only good thing was that his final moment as a Rider is a happy moment. For a fan base that booed the greatest player in franchise history in his final home appearance, you really can't ask for a better moment than this to end on. Maybe its for the best that we didn't know this was it (otherwise there may have been a lot more dust in my eyes). 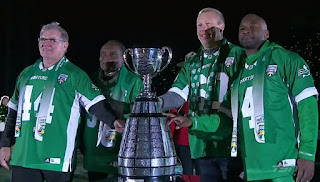 Both on and off the field few have represented this team as well as he has. I hope many people realize like I have that we witnessed the second best QB in franchise history. Players like him don't come around very often. Thanks for every Double D.

Love Durant but was a tad overrated, let's face it a monkey could have won the cup with that 2013 team. Bottom line is not very many wins since, probably shoulders way to much blame when things go bad and too much credit when things go well. I guess the full rebuild is now in force, gonna be another upcoming long season me thinks.