Riders vs. Ti-Cats: Willy Or Won’t He?

Sunday the Riders put their 3 and 0 record on the line as Kent Austin brings his Ti-Cats to town for a Sunday night showdown. The big question heading into the game is of course the health of Durant. His foot was healthy enough to practice yesterday but I have my doubts that he will play on Sunday. Honestly if there is any question about Durant’s health he should sit. No need to push him this early in the season. Plus it gives us the chance to unleash our Willy.

If there is any team that I would feel confident starting our back-up against, its Hamilton. We have a long history of embarrassing them with our clipboard holders. Durant’s first big game was against them. Rocky Butler embarrassed them so bad the Ticats overvalued to the point where they sent us anyone with talent on their roster in a trade for him. Yes while I would greatly prefer Durant play, I’d be ok with watching Willy in action.

The other big story is the return of Kent Austin. I could do a full post on this alone but I will keep this short and sweet. Why anyone is pissed at him now is beyond me? He didn’t turn us down and accept Hamilton’s offer… we didn’t offer him a job this year! We offered him one last year when he wasn’t ready to come back to Canada. Get over it.

Back to the game…

If it weren’t for the whole Durant situation this post would be all about how this game screams “It’s a Trap!!!!” to me. After 3 big wins against a couple credible foes, we get a home game against an inferior struggling team who is without their top receiver. Should be a no brainer, therefore: trap game. The questions about Durant’s health will hopefully give that extra focus that is needed to come away with a win that we really should get.

And let’s be honest… we should win this game. We are the highest scoring offense, they have allowed the most TDs. They have a struggling offense, we have a suffocating defense. We have a run game that is beyond dominating, they have a run D so crappy its like they are trying to avoid tackling the RB. Even with Willy in, the match-up on paper is very much in our favour.

But the games aren’t played on paper so the team needs to focus and continue to execute at a high level to remain undefeated.

Defensively (as always) the key is to harass Burris. This should be pretty easily achievable for a couple reasons. 1 – Their OL has allowed the second most sacks and 2 – they have no run game to speak of to take the pressure off Hank (Burris pretty much has more rushing yards than all their RBs combined). With crappy protection and no run support, the offense will fall entirely on Hank’s shoulders… and we all know that when that happens he starts forcing things and makes mistakes (usually of the embarrassing variety). Our front 4 should be able to get pressure so the key will be containing Burris and forcing him to throw. Burris will also be without Fantuz so he will have to rely on receivers that aren’t overly intimidating. Play smart, play aggressive, force Hank to throw. We should see sacks, we should see turnovers. As long as we don’t get sloppy and allow big plays, I don’t see a ton of points being scored (even with us having to patch together a secondary for this game).

Offensively I would imagine the Ticats will try and key in on Sheets but good luck. Better defenses than the Ticats have tried and failed. The Ticats have allowed a run of 70 yards or more in each of their games so far. Only way Sheets doesn’t make it 4 in a row is if he gets tired and stops to call his mom and update his stock portfolio. Look, no one knows better than George Cortez just how shitty Hamilton’s D can be. You bet he’s got a plan to attack every one of their many weaknesses (its a long plan). A weak front 4 and weak secondary are not a good combination (usually one can compensate for the other). I’m assuming Willy plays but unlike other OC’s I don’t see Cortez going conservative. Obviously we will attack with the run first but Willy will be passing… and not just 7 yard outs. He may even pass to Geroy Simon who will finally start earning his massive paycheque. I don’t see us scoring near the 36+ points we’ve grown accustomed to but Willy can score and when you add in Sheets you should get enough points to win.

Hamilton has been improving slowly and with they will be no pushover especially with us having to play with our Willy. Cortez will keep the O producing and without Fantuz I don’t see Hamilton making this a shootout.

Riders by 14 (more if by some miracle Durant plays)

PS – This will be Burris’ reaction to losing… 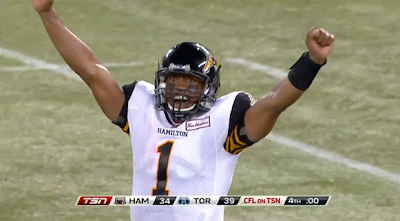