Monday Morning Sentimonies: Should Have Gone To Karaoke

The annual Rider Prophet road trip was going along fantastically. As expected there was shenanigans, tomfoolery and a variety meat platter. It even featured a healthy dose of blasphemy, most notably when a Rider fan in a green luchador mask and championship belt knelt before me and asked for my blessing (yeah I’m probably going to hell but its not like that wasn’t going to happen anyway might as well enjoy the ride). Unfortunately the trip peaked right around halftime.

Halftime was of course Mascot Soccer, which is among my favourite things in the world. Seriously if there was some sort of mascot soccer league, I would buy season tickets. This year’s edition did not disappoint. It was highlighted by a Hit of the Year candidate when one mascot form tackled another sending him to the ground and his mascot head flying (I didn’t think the guy would get up after that hit). It was also highlighted by a breakaway goal by the Wendy’s Milkshake. 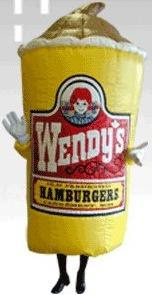 Picture this giant milkshake with spindly little legs and no apparent eye holes on a breakaway while his suit is deflating around him, knocking in a Highlight of the Night calibre goal while falling down. It was all kinds of awesome.

Unfortunately the football game it witnessed was nowhere near as awesome. In fact it was pretty pathetic.

We were thoroughly outplayed in the first half but managed to weather the storm and keep the game tied. Like many I was confident the Riders would come out strong in the 2nd half and emerge victorious. I mean Patrick had already picked of Henry twice in the endzone, the patented Stampeder collapse was well on its way. That prediction was so wildly off base that I think I’m now qualified to be a weather forecaster. The Riders continued being thoroughly outplayed in the 2nd half and things quickly got out of hand.

For me the story of the game was in these 2 stats: 247 rushing yards allowed and 3 INTs. Plain and simple we lost the battle in the trenches. Our D line got pushed around which led to big holes opening up for Reynolds and Cornish (who we looked powerless to stop). They also failed to get any tangible pressure on Burris which gave him plenty of time to pick apart our secondary. On the other side our O-line had no answer for the furious pass rush of the Stampeders. It looked like a bunch of high school kids had snuck onto the field disguised as our line they way they were getting manhandled. Durant had zero time in the pocket and that led to him making numerous ill-advised passes and multiple turnovers.

I’d comment on the continued ineptness of our special teams unit but quite frankly they are playing exactly how you’d expect a group coached by Jim Daley to perform. This guy has been a coaching failure for longer than some of his players have been alive. The decision to hire him rivals the decision to bring in Michael Bishop in 2008.

We are still 3-1 and tied for first place so its not the end of the world but the Stamps exposed some glaring weaknesses in our team that we will need to address if we want to get back in the win column. Besides it could be worse... we could be the Eskimos.

Posted by Rider Prophet at 7:16 AM