Tuesday, the career of one of the most entertaining Riders came to an end. Over the past 9 years, Scott Schultz’s on field intensity and off-field hilarity endeared him to both his teammates and the fans and etched his place among the franchise’s best.

In honour of Schultz’s illustrious career in Green and White, I present to you a look at #96’s most memorable moments on and off the field.

10 – 1st Round Success
The Riders aren’t exactly known for their success in the 1st round of the Canadian Draft. This franchise has used their precious 1st round selections on such future all-stars as Curtis Galick, Ducarmel Augustin and Nathan Hoffart. Schultzy will go down in history as one of the few 1st round picks we actually got right.

As funny and entertaining as Schultz could be off the field, when he stepped on the field he was the polar opposite. He was intense, mean, angry and above all else he was tough as nails. This famous photo says it all… 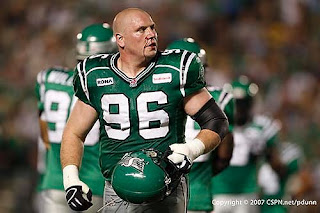 8 – Firing Up The Team
Before every game the Riders circle up at midfield to get jacked up for the upcoming battle. Right in the middle, jumping around and firing up the team was #96. As Media Consultant pointed out to me “The team will miss having a 300 lb white guy getting crunk in the huddle before every game, that's for sure. If that doesn't fire you up, what will??”

During the 2003 West semi-final, the Riders were eager to make the Bombers pay for Troy Westwood calling us a bunch of banjo picking inbreds. Early in the game Schultz and Nate Davis sacked Khari Jones and proceeded to pick their air banjos in celebration.

6 – Punting In The Rain
Just before the refs stopped the Thunder Bowl game due to lightning, another classic Schultz moment took place. Sean Fleming was attempting to punt the ball but he mishandled it, and Schultz ended up scooping up the ball. In the ensuing celebration he ran a few steps and hoofed the ball himself. 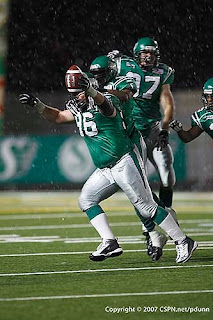 5 – Champion
It read like a story book. Kid from Moose Jaw, grows up cheering for the Riders, gets drafted by them and goes on to win only the 3rd Grey Cup in franchise history. And as always, Shultzy celebrated in style… 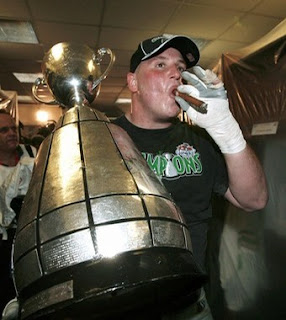 4 – Television Star
When Rick Mercer came to town to do a segment on the Riders, Schultz, as always, took full advantage of the camera time and stole the show with such memorable lines as “Richard get out of my A Gap” and “You had me at Piffles”

3 – Sassy Pigs
Schultz was always one to speak his mind, which made him a favourite among the both the media and the fans. One of his most famous quotes came in 2003 when he referred to the BC O-line as “Fat Sassy Pigs”. The line is so infamous that Schultzy referenced it at his retirement press conference.

2 – Moose Jaw Stomp
You knew it was coming anytime Schultz got a sack. It was Shultz’s trademark and quickly became one of the most famous dances in the CFL. It’s like John Madden said in the replacements: “I love seeing a fat guy score. Because first you get a fat guy spike, then you get the fat guy dance.” 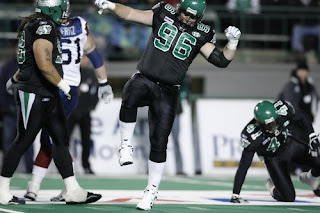 1 – Spergeon Wynn
In 2006, the Argos came to town and were in the unfortunate position of putting Spergeon Wynn in at QB. In a play I will never forget, Schultz got loose in the backfield and had an open shot at Wynn. Not one to squander an opportunity, Schultz delivered a vicious hit that nearly decapitated Wynn and sent his helmet flying farther than most of Wynn’s passes went.

As devastating as that hit was, the quote that followed will go down in history as the greatest Scott Schultz quote ever...

“I would have made that hit on Jesus himself”

Posted by Rider Prophet at 5:24 PM

The best top ten ever. You should e-mail him this post at his new job. He would be proud.

So long, Schultzie! The field won't be the same without ya.