So The Rider Prophet finally took a vacation, and in his absence he left his blog under the watch of the Media Consultant. Yeah… there’s a real good idea. I liken that to George Bush taking a few weeks off and asking Castro to handle the national addresses until he gets back.

For anyone that’s curious, Prophet has gone off to the Cypress Hills for a few days, following which he’ll be going on some sort of canoe trip. For anyone wondering why I’m not also on this canoe trip… not really my thing. I’m not really sure what goes on out there, but this is apparently a photo from Prophet’s last canoe trip. 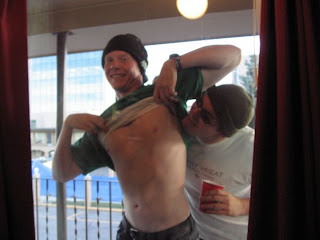 Anyway, very few of you (but possibly some) came to see lewd photos of the Rider Prophet, so let’s move on to some actual Rider discussion. Specifically, the tale of two quarterbacks.

The big issue on everyone’s mind in Riderville right now is who should be starting at quarterback this weekend. On one hand, you have Darian Durant – a young quarterback who has looked solid (but not without mistakes) in two and a half games so far this year. On the other hand, there’s Marcus Crandell, the opening day starter who is on the verge of returning from a hamstring injury.

The loudest arguments seem to be from the Durant supporters, who point out that he has carried us to the 4-0 record we are now enjoying, so how can you go away from the guy with the hot hand? What they fail to mention is that if Wes Cates doesn’t play an incredible half of football, Weston Dressler doesn’t make a miracle run, and Jason Armstead makes a smart football decision (okay, I realize that last one is a bit of a stretch), we could just as easily be 1-3. Good teams find ways to win, but it’s not like Durant is single-handedly carrying us to levels of success not seen around here since 1970. At times, Durant has been great. At times he has made poor decisions and mistakes. In fact, I think that these poor decisions and mistakes may have been weighing on his mind as he left the field on Saturday evening, and were possibly to blame for his inability to heal a leper while turning water into wine.

The fact is, Coach Miller has said from the very beginning that Crandell will start again when he’s healthy, and that is all the reason in the world to sit Durant back on the bench. It’s not like we were losing games with Crandell behind center, so what does that tell the rest of the players if Durant continues to play? To compare this to another situation, John Chick has played reasonably well so far this season, but what happens if Dek Bake goes in this weekend and shows signs of potential? Do we want Chick rushing himself back from injury, shuffling around on the field just to try to preserve his spot on the team? Doesn’t sound like a good plan to me. What it comes down to is that if Crandell doesn’t start the first game after he gets healthy, Ken Miller will have about as much credibility with his players as Keith Richards starring in an after school special. The more you know…

Well, I think that’s about enough for today. To be honest, I’ve been writing the jokes for these pieces for a little over a year now (the funny ones, at least), but I’m not used to having to come up with all of the filler to span the gaps between hilarity. But don’t worry though, by the end of next week I will be so good at this that no one will care about the alleged quarterback controversy, we’ll have ourselves a full-scale blogger controversy. Check back Friday when I set up this weekend’s game against the dastardly Kerry Joseph and the Toronto Argonauts.
Posted by Craig at 5:16 PM

Kudos Media Consultant, this may be the very best Rider Prophet post I have ever read. You have taken this blog to a new level, and I bow to your greatness!

Thanks Prophet. Coming from you, that means... well, very little. But it's the thought that counts!

Well to start good job on the first of what i can only assume many, due to what seems to be prophets growing alcoholism(see pic) on the other hand what can we say about craig that has not already been said about madana, your just being used and then tossed to the next poor fucker to use you some. So when prophet gets all that is transmittable from you be on the lookout for ARod he seems to like sloppy 1000"s and for T. smith he is looking for a conjical visit buddy.