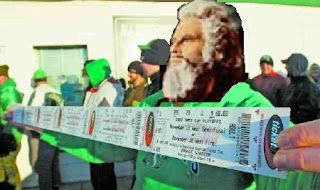 Ladies and gentlemen, the Rider bandwagon is full. Ticket sales for the home-playoff game caused people to jump back on the wagon at a rate not seen since prohibition in the early 1900s. Of course those who were unable to find room on the bandwagon have now begun complaining more than Henry Burris after an incompletion. My sources have forwarded me the initial press release the Riders were going to send out to disgruntled and ticketless fans (the copy that was eventually released was significantly edited):

The Riders would like to apologize for not giving part-time fans who only cheer for the Riders when it's convenient for them the same access to playoff tickets as our season ticket holders who have been cheering for us all season. We would further like to apologize for giving preference to individuals who have given us $250 for a share over people who prefer to spend their money on dirty magazines and cheap vodka. Finally, our sincerest apologies to any of those courageous fans who did not get tickets despite standing in a parking lot over night. While we are unable to discern what impact this display of loyalty has on the team's bottom line or what assistance it offers to the long-term viability of the franchise, this display of unwavering Rider Pride will not soon be forgotten.

Sincerely, your Saskatchewan Roughriders.
Posted by Rider Prophet at 1:47 PM