The 60s feature an impressive cast of some of the best Riders ever. It included many of easiest choices in this entire feature. But as always it also featured some questionable inclusions due to a lack of competition

60 – We start today off with the man who has played more games in Green and White than any player in history. With a resume that features 7 straight west all-stars, 5 CFL all-stars and back to back CFL Most Outstanding lineman, he is arguably the best O-lineman to ever play for us. He also has one of the biggest heads in franchise history. OL Gene Makowksy

61 – One of the first big name defensive linemen in franchise history. In his prime he was a force and a game changing presence. DL Ed McQuarters. He had 3 straight CFL all-star nominations and even continued playing years after losing an eye!

62 – 10 year career in green and white manning the tackle position. OL Vic Stevenson was a important piece in the 89 team. He actually won 2 more Grey Cups after leaving the Riders.

63 – So turns out that good players don’t wear 63. There’s Rene Brassea (the greatest Mexican national to ever dress for the green and white). There’s Derek Dennis (who is worthy of recognition… just not for his time here). I was about to give up and declare my first N/A but fortunately I came across OL Scott Hendrickson. His career spanned some pretty bad years for the franchise but at least he has a career worth mentioning.

64 – This number appears to be for people are great O-lineman but have their best years with teams other than us. Both Dan Comsikey and Dan Goodspeed (aka Dan Badslow) whore 64.  So out of pure necessity I’m giving the nod to OL Dakota Shepley.  I'm sorry there was no one else (something I'm sure one of my readers will correct within minutes of this post going live). I mean… he was in Deadpool.

65 – Okay, back to the super deserving players. One of the best nicknames in Rider history and his play definitely befit his name. DL Bill Baker “the Undertaker”.

66– Another one of the all-time great Rider OL and another local success story. OL Mike Anderson played for 11 years and in additional to being a steady presence in the middle of the OL, his resume includes a Grey Cup ring and an all-star nod in 1994.

67 – Anyone who suggests Dan Clark is getting slapped. Look, he’s great story, junior to all-star OL. And who knows, if he keeps playing like he did in 2019, he may yet become deserving of being included here. But for now this one goes to another OL… OL Clyde Brock. A dominating offensive tackle who was an all-star in 4 consecutive seasons. Ask George Reed how much he liked playing behind Brock.

68 – Looking back on the Rider O-line in the Shivers era, the level of talent was unreal. Gene Makowsky, Jeremy O’Day, Fred Childress and OL Andrew Greene. 3 of those guys won CFL Most Outstanding lineman awards, 1 would have had he not been playing alongside such big name guys…. And the other guy was Charles Thomas (cue sad trombone music). For all his greatness, Greene was commemorated by Wisers with this outstanding bobblehead. 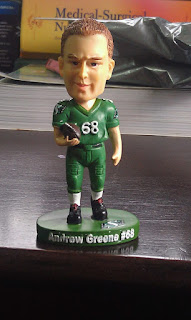 69 – If you didn’t just pause for childish laughter after reading this number, I’m not sure we can be friends. Fred Childress (the Big Chill) was a consideration but his best years were in Calgary. So I’m ending today’s list instead with a guy who was named a west all-star in 3 of his 5 Riders season… and  was a professional wrestle who fought Jake the Snake Roberts at WrestleMania 2. DL George Wells.