Well is wasn’t quite the sackfest I had hoped for (never thought I’d type those words) but the Riders took care of business Saturday night on home turf and got a much needed win over a struggling Lions team. The Lions should have known it was not going to be their night when their flag was upside down during the pregame festivities. 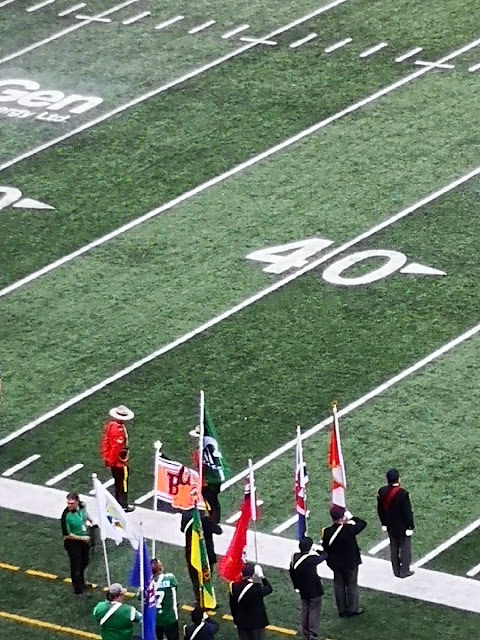 I remember that happening once before back in like 07 or 08… we won that game too. Maybe we are onto something.

Up until Marcus Thigpen decided to be all awesome, I thought we were turning in a pretty mediocre performance. Not bad, but doing enough bad things to let an inferior team stick around in a game we should have won more handily. That return seemed to spark the team and remind them that “oh yeah the Lions are terrible and we should crush them”. First half was plagued by missed tackles, missed coverages and pretty underwhelming pressure from our line against a BC O-line that I think I could have got a sack against. That said, it was really a Richie Hall-style bend but don’t break performance as the only TD in meaningful time was very much aided by a BS pass interference call. The D gave up way more yardage than they should have (particularly on the ground) but locked down when it mattered most.

I feel the need to talk about our front 4. Charleston Hughes was a beast and has been all year. The others… particularly our very, very expensive D-tackle pair have been very mediocre. Not bad, but at their price tag I expected a lot more disruption. I worry what will happen when the back half of the season hits and Hughes’ production declines. Is anyone capable of stepping up?

Offensively, other than the fact it took us way too long to figure out that maybe we should take advantage of the match-up on the outside, I thought we did good. We stayed committed to the run even though it wasn't going great. O-line didn’t allow a sack. Fajardo had a bounce back game. Made good reads and put up points. His legs were a big factor. Obviously he chewed up yardage but I like that he keeps his eyes downfield when running. That Moore TD was made possible because he kept looking for a pass even as he was on the move. Fajardo did have 2 picks but that is misleading as one was completely Kyran Moore’s fault and the other was on a convert. Overall he protects the ball well. With Arceneaux and Evans on the outside we had a huge size (and apparently talent) advantage. As mentioned, we should have clued into that way earlier in the game.

Special teams had a solid game. That Jon Ryan throw might be craziest play that never happened. First the design was interesting as we faked the onside to the left and then threw right. LaFrance made a ridiculous catch (that he made look very easy) and then Al Brabury gave the most confusing penalty explanation I’ve ever heard. We all the learned “The Card Rule” not that we wanted to. You see he was eligible but ineligible and so the card rule comes in but only if it’s an even numbered day in an odd numbered year. Only knock on special teams is that Ferraro has no distance on his kickoffs. But then again we didn’t really plan on him kicking this year. Punt coverage is getting timing down better with Ryan… we are even having the opposite problem as before and taking no yards. I honestly wonder if we coached him to just kick rouges because the math on our average net punt is worse. PS – If you cheer and punter getting a rouge… give your head a shake.

We managed to get more than 1 phase going and it led to a win (go figure). Offense was good. Special teams was good. Defense was OK. And you know what, we can win if we get 2 good phases and 1 ok phase. Trick will now be if we can repeat that performance on the road.

Other random thoughts:
-        Cory Watson has been an underrated contributor this year.
-        Elimimian still has a ways to go but the improvement from last game was noticeable
-        This is your weekly reminder that Solomon Means is terrible. Bouka can’t be worse can he?
-        The Riders have now scored 30+ points 3 times in 5 games. Last season we did it only 6 times total and that was because the D was chipping in.
-        I take back most of the bad things I said about Shaq Evans. Dude is kinda good.
-        The Riders sing along segment is the greatest thing about game day. William Powell’s dancing and the intensity in his eyes during Old Town Road was worth the price of admission.
-        I know why we can’t challenge illegal contact. Coaches ruined that one real quick. But how, when it gets upgraded to PI, is that not reviewable? I hate when technicalities take precedent over getting it right when the system supposedly exists to get things right.

Our interior DT's haven't come as advertised. Sacks isn't everything but a good DT should, & does, put up 5 a year consistently. Evans has 1 in 23 games since coming here - & his tackles are way down from his 2 seasons in Ottawa prior to signing here. If Micah is taking on double & triple teams, all the more reason Zack should be eating. As for Micah stating the obvious attention he's getting, he got 14 last year & was double & tripled up then too. Sewell has been getting extra attention for years & still gets his sacks, as has Laurent & Laing over the years. So your point is well taken. I am taking a wait & see on the Riders. Our previous win was a beatdown on the Argos followed by getting battered by Calgary. Beating up on the undeniably worst 2 teams in the CFL at this point doesn't guarantee much once we get past the next game. Let's not forget that BC was without Figueroa, their best on OL as well as Chungh for this game. Boyko was routinely beaten @ RT by Edmonton so they move him to LT. Foucault proved in the past he's too slow for tackle but that was him @ RT & Steward replaced Roy at CTR & promptly started sailing balls back to Reilly. Somebody besides Hughes should have been in on the action on this sad sack OL. Hamilton is up on deck shortly & Mtl looks like a decent team right now so I'm curious to see how we do there. Good news - back in the hunt. It's not like the Eskimos haven't picked up a couple courtesy of the Lions. Strange year so far.

Nice win, back in the race. One thing to add. Does Jon Ryan understand "net" yardage? There's no fair catch so stop booming punts for singles & giving the opposing team instant missed FG starting points. We get it - you can blast that ball. But it's not a kicking derby. Paid too much for this guy.

Look I'm like the champion of the "Anti Jon Ryan hype club" but to be fair on at least one single the ball landed in play and bounced into the endzone. He certainly hasn't given the boost some were expecting to our teams. It's better than first couple games but we still did better with Bartel's weaker leg but more predictable placement.

Considering our propensity for two and outs last year, maybe our offensive game plan for 2019 was at least a rouge on every possession?

That would have been an improvement over last year's offensive output.