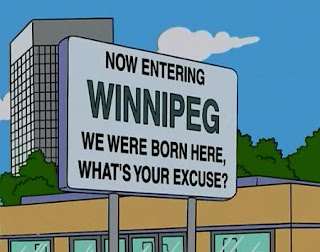 Saturday the Riders travel to East to for a rematch with the Bombers. It’s the annual Banjo Bowl, inspired by the infamous comments of Troy Westwood. I don’t have a lot of nice things to say about the Bombers or the province of Manitoba (other than their sports fans are very good at waiting patiently decades at a time) but Westwood’s banjo comments remains one of the most solid sports chirps I’ve heard.

This will be a game all about adjustments. The teams have now seen what each other has and the team that makes the better adjustments will come out ahead. Defensively that gives me great hope. Jones knows what he is doing and if you look closely we need to lock down 5 plays. Harris had runs of 38, 12, 11, and 25 plus a catch for 15 in the first half. That’s 100 yards right there. Lock those down and the complexion of the game changes dramatically. Offensively the adjustments we made in the second (i.e. do something and lean on Thiggy and Roosevelt) give me hope… not huge hope as it would be silly to put a ton of faith in our offense if you’ve watched any of our games but at this point I’ll take whatever small amounts of hope we can get.

I was shocked to see no trickery or shenanigans last week from the Bombers so I’m doubling down and saying that for sure this week they are going to throw something at us. They need a kick-start and lord knows just assuming Matt Nichols will eventually come out of his funk hasn’t been working for them. We gotta slow down Harris this week. Runs for 5-6 we can handle but those big long ones need to be eliminated. Evidence would say we need to get physical on him. He took a big shot in the second half shot that clearly affected him as his production was pedestrian and use limited after that. Sounds like Brooks is back this week which will be a huge boost to our front 4 and run protection. Secondary needs to stay disciplined. For as well as they played overall, there were still too many breakdowns. Marshall needs to find a bit better balance as a risk taker. Its got him 2 pick sixes and some knockdowns but also gotten him beat deep a lot. Sounds like both Foketi and Hardrick are out this week so Neufeld figures to be the tackle. Long time readers will know that Neufeld was squarely on my hatred list when he was here. Admittedly Winnipeg has gotten more out of him as a player then we ever did but Neufeld vs. either Hughes or Jefferson should be huge advantage for us. Keep the pressure on Nichols. If we get to him early the boos from his own fans will likely be more thunderous than the ones Rider fans gave him. Winnipeg has the second most turnovers. Expect that trend to continue… I’ll say 3 turnovers in this game.

Offensively we need to do something in the first half. We produced just 90 yards in the first half and had Matt Elam and Kyran Moore not bailed us out it could have been too little too late when our O finally woke up. As we learned last week Roosevelt and Thigpen are the wheels that turn our offense. With our offense being more useless than Grey Cup Parade map to Bomber fans in the first half, Roosevelt only had 2 receptions and Thigpen did not touch the ball offensively. I repeat DID NOT TOUCH THE BALL OFFENSIVELY. When we finally gave Thiggy the ball his first 3 touches went for 12, 9 and 18 yards respectively. Of his 7 offensive touches 4 went for double digit yards. I get that’s he’s not an every down back (particularly this week when he’ll be returning more) but you maybe think we need him involved before the second half?!? Collaros needs to eliminate the token INT he’s been throwing of late. I expect this game to be a lot closer so any mistake on either side will be magnified. Protect Collaros, protect the ball, lean on Thigpen/Roosevelt and keep Williams-Lambert involved. That’s our recipe for success.

Big opportunity here for the Riders. A win seals the season series with the Bombers and keeps us in the driver’s seat for a potential home playoff game. We have momentum on our side but make no mistake, this is a desperate Bomber team.  A 4th straight loss keeps them near the basement in the west and puts them essentially 3 games back of us with only 6 games remaining. They have also already lost 4 of their 5 games against West teams. Not to mention losing a game this big in front of a home crowd would be super deflating. Expect them to come out swinging and be willing to throw everything trick they have at us.

Winnipeg is a touch place to win for us. We haven’t won their since 2014 and we had to sacrifice Durant in that win. A slow start like last week will kill us in a hostile (and generally unhygienic) environment. We have 2 games in Winnipeg left on our schedule and need to win at least one to secure the season series. When we play in October we will be on a very short week coming off a Monday game so this is likely our best chance. If it was me running the show I would be looking to swap Bagg for Stanford and Jovon for Blackmon in this one. I think a little veteran savvy would really help the team in a hostile place like Winnipeg. But Chris Jones is as likely to ask my opinion on roster decisions as he is to wear a nice pastel polo shirt with the top button undone.

Lots of stats I could quote but the one that stands out for me is the teams’ records in games decided by 1 score. Riders are 4-2. Bombers are 1-3. Winnipeg has also managed to lose 4 games where they led at half time. One team seems have that killer instinct and be able to grind out the close victories. Given that I see this being a close game, that favours the good guys…

Riders by a Lauther FG from 40+