So these awards have reached an amazing milestone as this is the tenth time I am handing them out. I use the term "annual-ish" though because apparently I didn’t bother doing these last year… not really sure why but the official story is that I was preoccupied tending to orphans and volunteering for the underprivileged. But enough outright lies from me… let’s get to the awards.

In honour of our tenth anniversary award recipients will get the biggest prize package in the history of the awards. The bar for that is of course set extremely low as there has never been an actual prize handed out (my original plan to call them the golden rod’s hit a legal snafu with an adult film company). This year’s prize is the winner’s choice of either 2016 or 2017 Calgary Stampeder Grey Cup Champion hats… for some reason they were looking is dispose of a ton of both of them.

Best Player Name
It was really a lacklustre year for quality player names. I mean previous winners like Willy, SirVincent and Lirim Hulahoops are still around but we were lacking in new entrants into the category. So with limited options I had to go with a predictable but still always popular around these parts option…
Rakeem Cox

Quote of the Year
Honourable mention to the Rider defense following the Duron Carter Pick 6… “Hey Bo, he’s still your best receiver.” But this year’s winner gets the nod not for comedic merit (as usually occurs) but pure ineptitude. The co-winners for 2017 are Kavis Reed and Jacques Chapdelaine for their explanation of the Bear Woods release.

Way to get your stories straight guys. Unsurprisingly this was the tip of the iceberg of a leadership situation in Montreal doomed for failure.

Play of the Year
Many plays this year entertained me. Such as Crezdon Butler bouncing off the uprights (though it wasn’t so funny at the time) or Duron Carter making a first down and then cheap shotting the defender. The runner up was for Rider Tevaughn Campbell giving up a safety on an interception and in most other years it would have won. But while my Play of the Year for 2017 happened on the football field it was not a football play.

In the video below you will see Simoni Lawrence steal Antonio Pipkin’s towel and it devolve into a game of keep away where Pipkin looked as helpless as a nerdy grade schooler. Hilarious!

Botched Call of the Year
This tends to be the most difficult award to hand out as there are literally dozens of potential winners each week. But while botched calls are nothing new to the CFL (particularly the Command Centre it seems), few have ever had such large and public consequences as what happened on July 13.

Ryan Lankford had already scored a kick return TD and in the second quarter Martese Jackson also broke free. CFL fans far and wide know what 2 kick return TDs mean… $1 million dollars in Safeway touchdown to win! What a glorious moment! Karen had won $1 million and the CFL world was full of excitement. But wait… the was a flag on the play. Sure a great PR story for the league was about to occur but who has time for that when minimal contact has occurred on an opposing player that in no way affected the play?

To their credit, the CFL and its sponsors were quick to give poor Karen a lot of consolations prizes but it was no million dollars and it was only after the damage of a bogus call had already been done.

The Commercial I Didn’t Get Sick of Seeing Even Though TSN Made Me Watch It 54,297 Times Award
In a first for this award we have a repeat winner. This is not really a reflection of how good the commercial is but rather a reflection on just how little effort advertisers put into in game commercials. The Buck Pierce BelAirDirect insurance commercial where Craig Butler destroys him wins again.

I can't actually track down a video of the commercial anymore as it seems that like most of Buck Pierce's memories predating that hit, it has vanished.

Most Insulted Sports Figure
This should come as no surprise to anyone to regularly reads the space. My hate list is decidedly lean of late (generally a good sign for the team’s performance). While I wish Bakari Grant would not wear sleeves and I make not attempt to hide my lack of Dan Clark love, one person stands above all others in terms of those I’ve insulted this year. Offensive Coordinator Steve McAdoo. From his seemingly religious based aversion to running, to his insistence on randomly inserting the 3rd string QB at the most inopportune times, to his inability to adjust his play calling when adversity hits, I had many choice words about Mr. McAdoo (many of which were curse words). I guess the good news for us is that he wasn’t the least successful McAdoo in the football coaching world this year.

Fans’ Choice Douche-Bag of the Year
You the fans have spoken yet again… and resoundingly so. In the largest majority in this history of this award (shattering the previous mark of 66%), you the fans have decided that with 78% (93 out of a possible 119 votes) Jason Maas is your Douche Bag of the Year.

It should really come as no surprise. Maas has a face only a mother could love and an attitude that only the blind and deaf could love. He throws more temper tantrums than a toddler. He breaks equipment. He berates his own staff. He rolls his eyes. He has unwavering belief in the power of the field goal. By the end of the season it got so bad that TSN essentially had a camera devoted to him looking to catch his tirades.

So congratulations to the most unanimous douche bag in the illustrious history of this award. 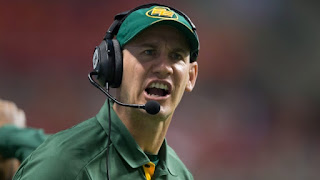