The CFL Draft goes tomorrow. This year’s edition has been expanded to 8 rounds… for the Simpsons enthusiasts among you this means we are getting closer to hearing the phrase “we now return you to exciting 15th-round action at the Canadian Football League Draft” 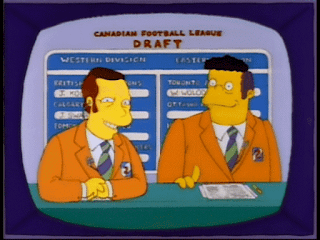 I have good news for those who eagerly look forward to my Annual Draft Day Live Blogging (all 2 of you). My 8th Annual Live Draft Day Blogging is a go. So I will have draft coverage starting at 4:30pm and running until I generally lose interest or get hungry (historically somewhere around the end of the 3rd round). So join me for this country’s second longest running CFL draft day coverage… what I lack in quality I make up for in longevity.

Today I will unveil my Official Mock Draft (not to be confused with the imitation Rider Prophet Mock Drafts out there). In posting this I am fully aware that within 2 minutes of the draft starting, no less than 3 things will happen than will render my predictions completely irrelevant. It may even happen within 2 minutes of me posting this. So take it for what it’s worth. Note: This is worth roughly what you paid for it. Perhaps slightly less.

Round 1
1 – Saskatchewan – OL Josiah St John - I believe the Riders’ preference would be to trade down either to get more picks or get a Canadian player and a pick but there might not be enough demand out there for them to get their asking price. Assuming they keep the pick it will be used on an OL. St John is not the safest pick among the top OL prospects as others are probably more pro-ready. But he may have the highest ceiling as a potential starting tackle. We don’t need him to start right away so we can be a bit patient with his development.

2 – Montreal – OL Jason Lauzon-Seguin – Josh Bourke left via free agency and its likely Luc Broudeur-Jourdain will not be ready for the start of the season. Als still have a good stable of OL but would be wise to add to it given the quality of OL available early in the draft. One would expect them to take Charles Vailancourt but Popp is anything but conventional with his picks.

3 –BC – OL Michael Couture – BC was forced into starting an American centre last season, something you can bet Wally won’t want to see again. Couture is arguably the top centre available and can provide immediate depth for a weak interior BC OL while being groomed as the centre of the future.

4 –Toronto – OL Charles Vaillancourt – Vaillancourt has been project to go as high as #1 and is arguable the most pro-ready OL prospect in the draft.  Jim Barker will be doing back-flips if Vaillancourt falls this far. Normally he wouldn’t but both Popp and Buono tend to do weird things with their top picks so I see this as entirely possible.

6 – Calgary – RB Mercer Timmis – Lots of talk of Timmis’ stock falling after mediocre testing at the combine and Calgary being more interested in a OL in the first round but I’m extremely skeptical. If Calgary really thought Timmis would be there when they pick again at 15 they would pass on him, but I think Winnipeg is likely to scoop him at pick 11 if Calgary passes. I think the Stamps are far more interested in Timmis then they are letting on.

7 – Ottawa – OL Phillipe Gagnon – Logic (and my pre-draft team analysis) say Ottawa targets a defensive player here but I can’t see them passing on a stud OL like Gagnon.

8 – Edmonton – DL Trent Corney – Many expected Corney to get an NFL deal given his athleticism but he only got a mini-camp invite which skyrocketed the stock of the best DL in the draft (not counting Oneymata). He could go as high as 4th overall so Ed Hervey will gladly take him to close out Round 1.

Round 2
9 – Winnipeg (via Edm via Ssk) – OL Brandon Revenberg – Winnipeg needs O-lineman as they currently have just four Cdn OL under contract. Revenburg has not been getting the hype of some of the other OL prospects but is a solid prospect nonetheless.

10 – Winnipeg – WR Juwan Brescacin – Aside from Tevaughn Smith (who signed with indy) many view the big-bodied Brescacin as the top WR in the draft (though there certainly isn’t consensus on that). Bombers may be looking at starting 2 Cdn WR and so will need to add to their depth at that position.

11 – Montreal – OL Dhillon Guy – Popp drafts the best player available and you can never go wrong with an OL.

12 – BC – WR Llevi Noel – BC needs to fill the void left behind with the retirement of Austin Collie.

17 – Edmonton – DB Arjen Colquon - With no glaring needs, Hervey can swing for the fences and risk waiting out Colquon's NFL interests

If Singleton is still around at 9, he'll be a Bomber. I can't imagine they'd pass on him.

You might be right. Singleton was a hard one to peg. He could go as early as 4 or 5 overall but most teams have more pressing needs at other positions. I probably have him going too low but I guess we will see