We are in the midst of the dreaded lull in the CFL calendar between free agency in February and the draft in May. There is generally no more than a smattering of news stories each week which means devoted bloggers such as myself (okay in the spirit of honestly, half-assedly devoted bloggers such as myself is more accurate) are left to try cobbled these bits of CFL news into a somewhat coherent collection of thoughts (or as its know around these parts quality that exceeds the average).

This week's array of topics include the CFL Combine, Proposed Rule Changes and the pictures that were released of what the football ops rooms in the new stadium will look like.

CFL Combine
You folks know that I am a CFL Draft junkie. I read everything there is to read and starting in April I will once again have CFL Draft analysis, predictions and coverage. One thing I am not though is an evaluator of talent (well to be fair there's many things I'm not but let's try and focus). I will profess to being woefully under-informed on collegiate football and in not much of a position to be making talent evaluations based on combine performances. So while I will put my draft analysis up there with most out there, I will defer to people who do Combine coverage way better than me. I highly recommend http://bomberbuzz.com/ where you can find some great stuff on the Combine.

Rules Changes
I will preface any discussion on potential rule changes by stating that I am sick on tired of the perceived need to change the rules every freaking year! I'm all for the game evolving but there's this mentality out there now that unless the CFL changes at a handful of rules every year they feel they aren't doing their job. Change for the sake of change is stupid and generally overreactionary. How can we honestly expect any kind of consistent performance from the refs when the rules change every damn year? Add a little stability to things and you might be surprised to see the positive results.

Are the rule changes proposed this year revolutionary? To be fair they are relatively minor. But I just hate people trying to justify their jobs by forcing rules changes on an annual basis. I actually would be in favour of the idea for a video review ref if I weren't so convinced by past experience that the CFL will find a way to screw this up. The amount of questionable decisions that emanate from video review already make me sceptical that this idea (though fine in theory) will help. At some point they will need to recommend the establishment of a video review process for video review.

I mean if you're the police, who will police the police?
I dunno. Coast Guard
(I award you bonus points if you get that reference)

New Football Ops Pictures
We'll end today on a positive note by talking about the impressive pictures that were released of the Riders' new digs at the new Stadium. To say this is a huge improvement for the team would be an understatement along the same lines as saying alcohol moderately increases the rates of promiscuity at Craven. To help drive home just how big a step forward this will be for the team I will contrast the new with what it is replacing. 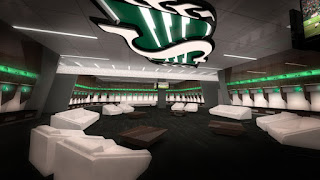 Th new seating in the locker room will replace the milk crates borrowed from behind the grocery store. The floor will no longer just be dirt and the lockers themselves will replace the current need for the team to covertly steal lockers from local high schools. 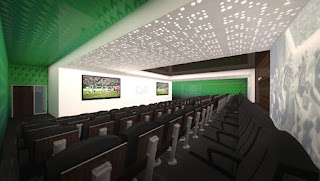 This team meeting room will replace the current one that features one 56k modem, a collection of coaches people left by dumpsters and one solitary 13 inch black and white TV that the rookies have to take turns holding the rabbit ears so it gets reception 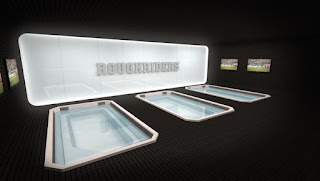 Lastly this Hydrotherapy room will replace awkward sponge bathes from creepy eyed trainers.
Posted by Rider Prophet at 6:00 AM