The following post is approved by white Andrew Green. 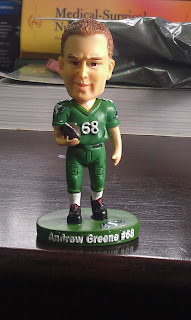 PS – I have been alerted to the existence of a black Gene Makowsky. I desperately want to complete my racially incorrect tag team so if you have one or know someone who does please contact me.!!

Saturday the Riders close out their season series with the Stamps at McMahon Stadium (Still find it odd Mike McMahon got a stadium named after him). This is the deciding game in the series with each team taking a game on home turf already. If the Stamps win they lock up first. If we win, we still have an outside shot at first but more importantly send a message than even if the playoff path goes through Calgary we can beat them. This is a marquee match-up (which unfortunately likely means that TSN will assign Rod Black) between arguably the top teams in the leagues. Top 2 scoring offenses, top 2 stingiest defenses, top rushers, top sack attacks, top O-lines, plus they hate each other. I mean take your pick. This should be a rare treat of a game late in the season where little is left at stake.

The key to winning boils down to one thing (and I’ve said it prior to both previous match-ups)… stop Cornish. In our first meeting we held him to 8 touches and 42 yards… result: we win. In the 2nd meeting he plowed over us for 16 touches and 175 yards and 4 TDs. In Calgary’s 13 wins Cornish is averaging 115 yards/game… in the 3 loses – just 65. It’s so obvious that even a CFL official couldn’t miss it. Priority 1, 2 and 3 is stopping him. He may be a douche bag but he’s a damn talented douche bag! (As a side note it speaks volumes that Cornish is going head to head with Sheets and despite his offseason foivals, Sheets stills comes out looking like the better guy). Last time we played, the Stamps dominated the trenches, got blockers on Rey Williams and had their way with us. We can’t let that happen. McCullough is hardly instilling confidence as faring better than Rey but our D-line is improved and should be able to better handle the Stamp OL and keep our LBs clean and able to stop the run. They also like to use Cote (who is one of the better blockers) so we will need to counter that as well. We can’t completely forget about the passing game as a guy as talented as Price will make us pay and Kevin Glenn (who is about the only Stampeder I respect) is playing great ball. But if we can limit Cornish and force them to beat us through the air, our odds of winning sky rocket. This is the best O in the league for a reason so it won’t be easy but we are also the best D in the league for a reason and should be able to flex some of that defensive dominance again.

Offense also have a tough task with Calgary being the second best D (and us being far from a high performing unit). Calgary has mediocre run D so logic would dictate a heavy dose of Sheets. My guess though is that the Stamps will be amped up to shut him down just out of pride. So we should use that. We still need to run but play action early could lead to big plays. Overall we need a mix. Run Sheets at Charleston Hughes so he can’t focus purely on sacking Durant.  But pass early and often to catch LBs when they cheat up on the run. Taj Smith is due for a long bomb. Also, Eric Fraser is not that good of a safety (and a well reputed wuss) so there will be chances to exploit the middle if we send a couple guys deep. They will likely key Keon Raymond and Brandon Smith on Dressler and Getz so that means guys like Smith, Bagg and Simon should have opportunities. Last time we played, Sanders scored on a beauty play might think about dusting that one off again. Lastly, when in doubt, hand it to Sheets… dude will be jacked up to show up Cornish and spite is a powerful motivator.

This game will be tough. Calgary has 13 wins for a reason (and in spite of a lot of key injuries). I expect Calgary to go up early because that’s just how things go. The Riders will claw back into it by half time and the second half will be a see saw, knockdown, drag out fight. My head says take the Stamps, but the way our defense is playing, my heart has a hard time betting against them. Pure gut call but as per usual, D will play great, O will do just enough…

Riders by a Getzlaf TD (who else you gonna bet on against the Stamps?)

If you are going cheer loud. Also try to egg stupid Stampeder fans into cheering contests against you while we are on D… in my experience there are ample people willing to take that challenge.
Posted by Rider Prophet at 6:00 AM