Apologies for the lateness of the post but I was in no condition to be penning my sentimonies on Monday morning.

Well that was unexpected. How unexpected you ask? Not even the designers of our new scoreboard envisioned a scenario where the Riders would score more than 40. 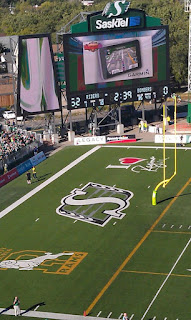 I figured we would win (I mean we’ve won with the likes of Bishop and Rocky Butler in years past) but I did not see that embarrassing ass kicking coming. As exciting as that win was though let’s contain our elation just a bit. Yes we were dominant in all phases of the game but it was against a really, really bad team. It’s kinda like fighting someone in a lower weight division or beating hamster in a game of trivial pursuit (well that’s probably not the best example since most people from Manitoba would in fact lose such a contest.. it would be akin to them fighting outside their weight class).

It just seemed that we could do no wrong: DeAngelis’ long FG deflects in, we recover our own kickoff on back to back drives, even the fan doing the chip-shot FG contest made his kick.

After weeks of complaining about everything we are doing wrong, I actually get to talk about what we did right this week. It’s no coincidence that when you start doing things right, winning follows.

I was most impressed in our offense came out. Over the past few weeks they had been more useless than Beta movie player but they came out firing on all cylinders. Now why it took this long to figure out is a question for another post. The list of things they did right that have been lacking in the past includes: getting Dressler involved early and often, using the waggle and motion to create separation, pushing the ball downfield even when the receiver isn’t wide open, spreading the ball around to all receivers, running early/often and most importantly late, using the run to set up play action, and using double tight ends and rollouts to help counter a strong pass rush. Bob Dyce, take notes!

Defensively we took away the run, we got good pressure with our front 4, we used the blitz well (especially in second down situations) and we created turnovers. Most importantly we kept them out of the endzone...I mean it’s sad when your offensive output matches that of your city's hockey team which is currently not playing. Brackenridge was a monster. He emphatically showed the staff why he deserves his starting spot and any though of sitting him are lunacy.

It may have only been one game, against the worst team in the CFL but it’s great to see the team come together in all phases of the game. In all seriousness if we could not have accomplished those things against this bunch of losers and their ugly as sin jerseys, what hope would there have been for us?

Things clearly won’t be this easy going forward but this is definitely something we can build on. If we keep doing the things I mentioned above, we will continue to have success, even if it isn’t to the same ridiculous level of dominance.

Other random thoughts:
-       I won’t lie the prospect of Jay Alford as longsnapper was concerning but he did just fine
-       Could Dressler have picked a worse group of people to attempt a Lambeau Leap with? Get excited people!
-       How stupid does the decision to scratch Jock Sanders last week look? Hope we never make it again.
-       Brooks Foster sure looked good.
-       Whatever drugs they shot Sheets up with must have been awesome. Guy was limping like a grandpa and then was good enough to pound out a 100 yard game.
-       Still not convinced with Neufeld at tackle but by this point I think we just need to commit to a starting 5 and stick with them for consistency sake
-       Durant looked really good until he got hurt.
-       Willy certainly didn’t light the world on fire with his performance but he did everything you hope your back-up will. He looked calm, moved the chains and didn’t make mistakes.
-       Another Willy note, if you enjoy plays on words and low brow humour you should check out my twitter feed @RiderProphet and #potentialwillyheadlines
-       Never thought I’d see JT O’Sullivan take a snap on offense
-       It’s a sad day when the only thing people from Winnipeg can score on is farm animals
Posted by Rider Prophet at 2:25 PM