You’ll note that it is neither Monday nor morning. Surprising as it may be this time it is note due to my general laziness. I had plans to write something yesterday but there was nothing to write about... somehow I couldn’t make a post about the retirements of Kelly Butler and Dan McCullough.  I mean I briefly considered making a post with the title “Veteran Snapper Retires” but I thought that might confuse readers into thinking they had stumbled onto a website about prostitutes. Today there were shreds of news, not much, but enough for me to make a half assed attempt.
The Riders signed 2 more today. WR Justin Harper and RB DeShawn Wynn. Applying my standard racial stereotyping DeShawn Wynn jumps to the top of the RB competition but I will put an asterix beside his name since he is 28 I quite frankly it would shock me to see him make our team. Harper interests me... in a purely football related sense of course... but based on his name, I will have to go ahead and write off his chances. If he has some De’s, apostrophes, dashes or dollar signs in his name then maybe we’d be in business. I still wonder if we will be releasing Yvenson Bernard before camp, we now have 4 other new imports plus West so I can’t see much room for him.
That brings our roster to a total of 68 meaning we have room for up to 7 more players for our training camp roster. 3-4 of those will come from the draft in May so we should expect 3 or 4 more free agent signings before June. Two names that have been on the radar to fill those few remaining spots:
The first is Odell Willis. Word is Winnipeg is listening to trade offers for the DE. Now it would likely be expensive to get him here and he is a bit of a head-case but the fact is, we need a DE desperately and he has 34 sacks in his 3 seasons here so he would definitely be a welcome addition. I doubt it’ll happen but we do have a first round pick and if there is one thing Taman loves more than acquiring former Bombers, its trading 1st round picks.
The other name is far less likely but I will mention it just because. RB Mike Sellers was released by the Washington Redskins. We Rider fans likely remember him running over us like a gopher on a prairie grid road when he was a Bomber. We likely also remember the playoff game where he ran his mouth big time and we shut him down and beat the Bombers. I doubt he will come back up north but I can bet Taman has at least given him a call.
Now if you will excuse me I have to go fill out my March Madness Bracket. In a move that will likely surprise none of you I am throwing my full support behind the Wichita State Shockers. Go Shockers! 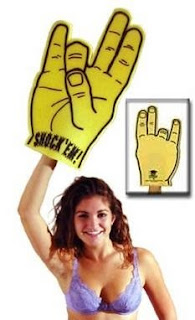 Posted by Rider Prophet at 5:19 PM

I get the foam finger idea, but can anyone explain to me why she's in her underwear? For me, the two don't go hand in hand...

Not sure. All i can say is when you search for "Shocker Fingers", the selection of pictures that are appropriate to post is limited.

As an alternativeBuy D3 Items if you might pardon me I need to get submit our Drive Insanity Group. In a go that can most likely shock not one people I will be organizingcheap Guild wars 2 Gold my own complete help behind the actual Wichita State Shockers. Get Shockers!