Ladies and Gentlemen: It’s time to present the Second Annual Rider Prophet Awards. Thanks to the generosity of our sponsors, this year’s winners will receive a selection of the coupons found in my daily junk-mail and a handful of mints that I managed to sneak out of Boston Pizza.

Let’s get right to it…

It was this quote that cinched it. When asked who he would be if he could be anyone in the world he responded…
“Scott Schultz, so I could play with my man boobs”

Play of the Year
When handing out this award, I like to look for a play that captures the essence of a team’s entire season. This year I had to wait until the final game of the regular season but I was not disappointed.

With the score tied in the dying minutes of the 4th quarter, the Argos were faced with 3rd and 10 in their own end against the visiting Riders. Rather than making the safe choice to punt the ball away and force the Riders to drive the field for the winning points, the Argos inexplicably called a fake punt and direct snapped it to the fullback. Well at least they tried to direct snap, the snap was atrocious, was bobbled and led to a loss of yards and a turnover on downs. It was pure hilarity.


Botched Call of the Year
While it was admittedly a fairly good year for officiating across the CFL, the referees were not without their foibles. For this year’s award winner we take you back to the Banjo Bowl. Michael Bishop threw a touchdown pass to Gerran Walker and we were all cheering… but wait, it seems the referees were too busy gawking at the inbred Bomber fans to make the correct call, and ruled it incomplete. The worst part was that Ken Miller had already used up his 2 challenges to fix 2 other blatantly missed calls in the game, so we couldn’t even review the TD catch. Needless to say this led to me hurling such profane language towards the television that it would have made George Carlin (God rest his soul) blush with shame.

The Commercial I Didn’t Get Sick Of Seeing Even Though TSN Made Me Watch It 54,297 Times Award
Probably the worst part of being an avid CFL watcher is being forced to watch the same 3 commercials during every commercial break of every game in the entire season. This award, new to our prestigious ceremony this year, is meant to honour those advertisers who at least make an attempt to produce commercials I don’t begin to hate before I’ve even finished watching it once.

This year’s winner is…


Actually Holiday Inn has had some quality commercials for the past few years. Now if only company’s like Wendy’s, Tim Hortons and Ford would quit airing crap (well I’ll take Ford off the list given that I don’t think they’ll be doing much advertising in ’09).

Fans Choice Douche-Bag of the Year
Well you, the fans, have spoken and with 52% of the vote you have chosen Rob Murphy as your Douche-Bag of the Year. Murphy becomes the second BC O-lineman to be recognized for his outstanding achievement in the field of douche-baggery, joining last year's winner, fellow tackle Jason Jimenez. Murphy earned himself this dubious title by repeatedly placing opponents in choke holds and liberally punching, all while inexplicably avoiding being disciplined… or even flagged for that matter.

Most Insulted Sports Figure
Marcel Bellefeuille jumped out to an early lead and looked like a shoe in to repeat. That is until Aug 23rd when Michael Bishop became a Rider. Within mere days he jumped out to an insurmountable lead in this award category and never looked back. I served up Bishop insults almost as often as he served up turnovers (I tried to keep up but it proved impossible).

To his credit, Bishop was man enough to accept his award his person and pose for this commemorative photo 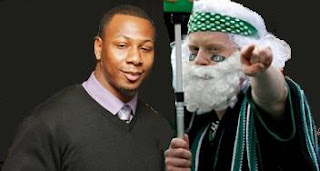 *Note: As you can see in the photo I tried getting Bishop to look at the camera but Barron Miles happened to walk by and Bishop instinctively couldn’t take his eyes off him.

Note: Jason Clermont has been released by the BC Lions. More on that on Monday.
Posted by Rider Prophet at 10:07 AM

Wait...is the botched call of the year the bad play call of the Argos, or is it Rod Black's interpretation of that play? Surely he gets honorable mention for bad calling all season long?

Rod Black is in a category all too himself. About the only thing missing from his list of screw-ups this year was accidentally using the term "triple salchow".

tj how could you replace me in this pick mith bishop. i am hurt!!

Look I'm the one who has to appear in a photo with Michael Bishop so of the 2 of us I think you come out ahead.

I could always ammend the photo show you expressing your love for Bishop...

Maybe you could just insert Bishop between the two of you? It could be like one of those tourist, photo-op boards. They have a great one at SafeCo Field in Seattle, where you get to make it look like you're climbing the wall to catch a ball and prevent a homerun.

By the way...good call on the least annoying ads. "The Pulski Pump!" That line still makes me laugh. I wonder if Pulski knew Bill Brasky?

If I was to make a photo-op board it would be one where it looked like you were kicking Michael Bishop in the crotch. I gurantee there would be line-ups.