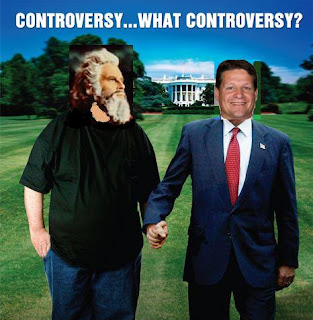 Well here it is. I've circled this game on my calendar and have been counting down the days. The Montreal Alouettes are in town and that can mean only one thing: French tourists? Diner specials on poutine? No, it means Marcel Bellefeuille (shown above) is in town! If you're a regular reader you're probably waiting for me to start dishing out an endless barrage of Bellefeuille jokes. Well let me stop you right there and set things straight. Although I have cracked many jokes at the expense of Bellefeuille this year it's all been in good fun and I really have nothing against him. I think he's a good guy. I mean Montreal making him their offensive coordinator was the best thing that could have happened for the Riders (if you're scoring at home that's 1 Bellefeuille joke).

This is a big game for both teams as they are both on a losing streak right now. I guess it should come as no surprise that a team coached by Bellefeuille is on a losing streak (that's 2). The Riders played pretty good last week so hopefully they can build on that this week. This game comes down to our defense (which has been suspect of late) vs. the Als offense (which has scored the 2nd fewest TDs in the league so far, again shocking given that it's Bellefeuille calling the plays... that's 3). Montreal will likely get Cavillo back this week but that will be offset by Watkins sitting out. There will be some changes to our defense with Clovis getting benched in favour of Scott Gordon, and there's a chance that Robinson could sit out due to injury.

There are two major reasons I'm confident about our chances this week. One is Montreal's O-line. It sucks. They have given up a league leading 51 sacks this season (15 more than the next worst team). We could line up Rick Hansen at D-line and still get 2-3 sacks. The second reason I'm confident is Montreal's offensive scheme. Our DBs would pretty much have to all be blitzing the QB to get beat deep by Bellefeuille's passing attack (4). If we can plug up the middle (to stop the shotgun draw) and cover Elijah Thurmon that will cover about 95% of Bellefeuille's playbook (that's 5 and I'll think I'll have mercy on Marcel and stop there).

Bottom line we should easily win the game and if we don't we are in trouble. I'm talking like OJ sized trouble.

Joke of the week:
Q: Why does Anthony Cavillo drink from a bowl?
A: Because he lost he last 3 cups

Around the CFL:
Sherko Haji-Rasouli was suspended for 1 game for punching Scott Schultz and ripping his helmet off. While the suspension wasn't much of a surprise, the fact that Rasouli won't appeal was. Sources say he had a pretty good defense lined up - Apparently, during the melee, he noticed that Shultz's nose was out of alignment and as we all know that can lead to blocked airways and suffocation. Caring only for Shultz's safety, Rasouli sprang into action. He quickly removed Shultz's helmet so he could get at the potentially blocked airway and proceeded to manually straighten the nose with his bare hands thus alleviating the threat of suffocation. Finally, Rasouli gently kicked the area near Schultz's ribs to ensure the lungs were taking in air (a technique similar to CPR). So what looked like a fight was nothing more than a concerned football player administering emergency first aid to his peer.

Fines were a big story this week, with the league handing them out with the frequency usually reserved for apologies for referee mistakes. Rob Murphy and Corey Rodgers were fined for their involvement in the brawl on Saturday. Eric Tillman was fined $1000 for making disparaging remarks about BC. And finally, the Calgary Stampeders were fined $10,000 for comments they made about the League following the injury to Burris. Message to Tom Higgins, what a waste. Do you know you could have tampered with 10 QBs for that price?

Finally, just when you thought that Toronto was done signing reject CFL players the Argos go out and sign RB Troy Davis. Davis becomes the 5th RB the Argos have looked at this season. You'd think this would be the last time this year the Argos bring in a rejected veteran but with quality names like Ranek, Warren, Hervey and Greene still out there never say never.

Well that's the way I saw things this week. This is the Rider Prophet saying: See you all down at Mosaic on Saturday and don't forget to bring a food donation for Tackle Hunger Day. Remember that thousands of people use the food banks every day, maybe even someone you know. Heck, if the Alouette's don't start winning, Marcel Bellefeuille might have to start relying on them too (6, sorry I just couldn't resist).